Season 2 of Apatow’s, Rust’s, and Arfin’s Love chronicles the ‘honeymoon stage’ of Gus (Paul Rust) and Mickey’s (Gillian Jacobs) relationship with plenty of bumps, missteps, and reconciling to follow. The first few episodes of the season are bliss, beginning directly after Mickey confesses to Gus that she is an alcohol and sex addict and that she feels some time away from being in a relationship would be helpful in order for her to heal. The two struggle to navigate friends-but-not-dating but quickly put their struggles to rest after each experiencing an uncomfortable evening with their respective friends. 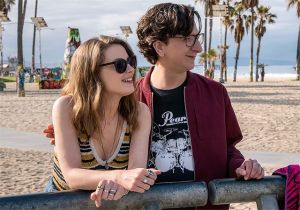 Early episodes of Love follow a parallel structure- the uncomfortable dinners, the first day back at their respective jobs- where Gus and Mickey are apart participating in similar activities but find themselves desiring the other’s presence when realizing their days are more enjoyable when spent together. They experience the euphoria of falling in love and soon experience even more ‘firsts’ in their relationship which, per rom-com fashion, result in unanticipated outcomes.

Love still contains some of the humor of its first season, but as Gus and Mickey’s relationship becomes more serious, the show becomes more serious. Gus and Mickey still lean towards awkwardness during their conversations, but they start to acquire some smoothness in words as their relationship progresses. With a greater focus on the two, there are fewer scenes that include supporting characters such as Bertie (Claudia O’Doherty) and Kevin (Jordan Rock), and therefore less comic relief. Unfortunately, attempts at comedy are hit-and-miss this season, coming off as unfunny or strange such as Gus’s boss offering to have sex with him (never again to be referenced in later episodes) or Randy’s (Mike Mitchell) experiences with psychedelic mushrooms.

Whereas Season 1 was all about Gus experiencing a mid-life crisis, Season 2 is about Mickey working to overcome her addictions and improve herself as a person. As a teetotaler in her personal life, Gillian Jacobs performs impressively in expressing the nuances of Mickey’s character. She excels in delivering passive aggressive responses to questions and channeling Mickey’s defensive personality. It’s hard to get in a word, let alone share a scene with Gillian Jacobs. Paul Rust- let’s give him credit- does his best.

As Mickey and Bertie express uncertainty about their relationships, the challenge that Love faces as a romantic comedy TV series is that repeated arguments and making up between couples functions better in the context of a film rather than a show. There’s only so many times we can see Gus and Mickey argue and makeup without wondering if their relationship will forever remain slightly dysfunctional in order to simply have some motivation to keep making episodes.

The structure of a romantic comedy film is often rigid and precise whereas Love can’t quite follow the plot conventions of the genre as a TV show. Season 2 retains our interest in the couple, although Gus and Mickey’s story will hopefully progress at least a few months where the couple can face novel challenges at the start of the next season.