I was intensely worried for this one. For the BBC to tackle such a difficult topic as the racism within a family show is a tough challenge, but I’d say they definitely pulled it off admirably, though not without a few stumbles along the way…

This week The Doctor and her gang are pulled back to 1955 Alabama, the day before Rosa Parks’ kickstarting of a civil rights movement by not giving up her seat on a bus to a white person, and are tasked with stopping radical time-travelling bandit Krasko (Joshua Bowman) from putting a stop to the event by any means necessary.

Director Mark Tonderai returns from last week with some more visual flare, taking full advantage of the set design and location work that the show’s eleventh season has been strong with so far. The streets are paved with people in pristine fine clothing and bustle with old-fashioned energy. But there’s little in the way of set-pieces and action scenes here, because ‘Rosa’ is an intimate human story, and one that manages to nail the practice of the new TARDIS team at the same time. Novelist Malorie Blackman and showrunner Chris Chibnall have penned a respectful and quiet episode, one that sometimes feels like it’s put all of its weight on the emotionality of the subject whilst ignoring elements of pacing and excitement that are commonly found within Doctor Who.

For the first time this series, every member of the team has something to do – and yes that includes Yaz (Mandip Gill), as The Doctor splits everyone up and assigns tasks to allow a real sense of teamwork to flow within them. This kind of dynamic hasn’t been fully utilised since Russell T. Davies’ era of the show and it’s a good look for this lot from Sheffield to take on in the future. I’d still argue Bradley Walsh’s Graham is the strongest of the lot, giving a nuanced and emotional performance during the episode’s later moments whilst offering up a fair amount of the show’s new comic relief too – his fish out of water routine could end up along the lines of Bernard Cribbins’ Wilf if played right. Tosin Cole’s Ryan works best when tackling his own confidence, be it building himself up to tackle an alien racist, or not letting his dyspraxia belittle his physical capabilities. However, it’s his moments with Yaz that help fully cement the importance of a message that still rings true in 2018.

“It’s not like Rosa Parks wipes out racism from the world forever” – Ryan Sinclair.

No punches are pulled by Blackman and Chibnall, as the first person we meet in 1955 violently threatens Ryan as he tries to help a fallen woman and is told to get his “black hands” off her. Racial slurs and profiling feature prominently within the story and are never held back. In particular a tense scene where a police officer barges into the gang’s motel room for smuggling ‘coloured’ people in, rang true in ways more than one and managed to state the protagonist’s views perfectly. The following conversation from a fleeing Yaz and Ryan about their own races is another strong character moment, though some of the dialogue feels a little on the nose at times. History wasn’t pretty for many people, and it’s when the episode decides to show rather than tell when it’s strongest.

Of course, this being Doctor Who there needs to be a sci-fi element, and this is perhaps the weakest aspect of the episode. Krasko is a bearded, leather jacket-wearing criminal from the future using a vortex manipulator (cheap and nasty time travel) and a temporal displacement gun to try and prevent the rights movement from happening. Being a criminal from the future he’s unable to commit violence thanks to an implant from the correctional facility, and the temporal gun allows him to transport beings and objects to other points in time. The concept of racism (and in particular, Earth racism) still being prevalent in the future is a nice point to bring up in the episode, as it’s a topic which sadly seems to be consistently appropriate. However, everything else down to the presentation of his storyline is so paper thin, that even a show that excels at having heroes running away from villains may feature the worst excuse for a chase scene I’ve scene in quite a while, as two shots fade into one another between two locations whilst the actors attempt to play against non-existent tension. It was definitely a low-point for the episode and something I’m keen to forget. I hope the bland villains aren’t a continuing trend for this season, as something the show’s often excelled at providing an arsenal of enemies for The Doctor to vie against.

Guest star Vinette Robinson (Black Mirror) shines as Rosa Parks, a stern and ethically-driven woman with little time for the lunacy from the TARDIS crew. She’s immediately likeable and intimidatingly strong, and kudos to the show for not implying that the show’s fictional characters had anything to do with her taking a stand on that fateful day. It was all Rosa and her memory was done justice by the representation, even when it decides to have a little fun. For example when Ryan joins Rosa for an evening he freaks out after meeting Dr. Martin Luther King in a wonderful example of the show’s ability to make you smile. 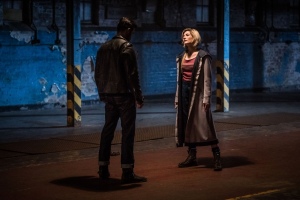 Of course it all leads to the pivotal and seemingly-innocuous bus trip, and whilst Krasko applies some light pressure, it’s the worry that there aren’t actually enough people on the bus itself to cause an issue that’s the most devastating. The notion of Graham (someone who’s been preaching equality and disgust at the mindset of the time period since the start of the episode) forced into being the individual that makes Rosa stand against the law is a wonderful touch, I just wish they had made it a little bit more emotional for him to be the one, especially considering his wife’s comments from when they first met. The actual act itself though was quiet, raw and powerful…up until a generic swooping pop song became the soundtrack to the final minutes, ruining what gravitas the episode had managed to muster up and brushing it off as a simple episode resolution instead of a dramatic and affirming moment of history. Why the show couldn’t have just employed silence during the ordeal is beyond me, as personally I think it would have had a much greater effect.

When Doctor Who was initially pitched in 1963 it was done so with an educational ideology behind it. An alien with a time machine is the perfect way to teach children about history after all, and whilst the show strayed into pure entertainment not long after its inception, Chibnall seems to have lived up to his promise of bringing back the educational factor. Technically it comes in the form of The Doctor outlining the events of Rosa Parks’ statement and how difficult the rest of her life continued to be, but it never felt too heavy-handed, and was well-seeded within the characters themselves, as Yaz seemed to be the only one fully invested in the history of where they ended up this week. It was a nice moment to end the episode on, and hopefully will be used as a jumping point for many kids around the world curious about the subject matter.

A welcome change of pace this one, and one that’ll hopefully be remembered for the positivity spewing from every fiber of its being.