Every once in a while the British comedy zeitgeist is forever altered as another show embeds itself in the pantheon of classics. Whilst it’s notoriously hard for shows to make a splash during their initial traditional run, it’s often a show picks up speed when it attracts online dedication in the modern landscape. It’s even more rare for a show to do so simultaneously as Phoebe Waller-Bridge’s Fleabag has done over the course of its two-season run.

A British production for the (then) newly online-only BBC Three network, the comedy-drama follows the exploits of Waller-Bridge’s Fleabag, a 30-year old angry, confused and sexually-active young woman living in London as she comes to terms with the precarious dynamics of her family relationships and her own pessimistic views on life, love, and the general inadequacy of it all. Picking up around a year after the end of season one, where the suicide of her best friend Boo (Jenny Rainsford) was revealed to be her fault, Fleabag seems to be on the mend. She’s stopped trying to shag everything that moves, she’s been attempting to keep herself physically fit and healthy, and her cafe is even doing well – she even runs a startlingly-popular event called ‘chatty Wednesdays’. But we know it can’t last forever, and immediately we’re thrown into the deep-end of bloody noses, miscarriages, torturous therapy sessions and impossible relationships. 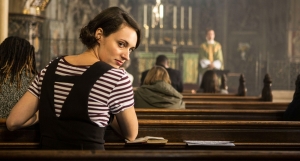 Arguably the biggest difference between the first and second seasons of the show is one of pacing. Whereas the first season of Fleabag often travelled at a dizzying pace, eager to prove its worth with lightning-fast quips and fourth-wall breaks left right and center, this year sees the show enjoying a victory lap. Sure there’s still everything that made the comedy punchy last time, but here there’s more emphasis on the emotional sides of the characters. Waller-Bridge, seemingly a natural with the spoken word having also penned the brilliant Killing Eve, flexes her dialogue muscles every chance she can. The entire first episode takes place over the course of a family dinner at a restaurant as her dad (Bill Paterson) and Godmother (Olivia Colman – in top insidious form) announce their engagement. Claire (Sian Clifford) and Martin (the perfectly slimy Brett Gelman) haven’t spoken to our narrator in a year, and seem to be passive-aggressively announcing their simultaneous teetotal attitude whilst trying for a baby. Oh, and there’s a priest now. The one annunciating the wedding, played by Sherlock’s Andrew Scott in a delightfully meaty role that would have been insufferable had it not been for such a great combination of writing and performing.

“Women are born with pain built in. It’s our physical destiny” – Belinda.

After the one-two punch of the post-traumatic stress disorder reveal in the wake of Boo’s death, Fleabag wastes no time in keeping its characters grounded and offering up witty dialogue as respite for the harshness of reality. Her Godmother and Martin continue to be some of the most detestable characters in recent memory, though their chemistry and presence remain unmatched. Colman in particular, surely now a worldwide phenomenon after her Academy Award win, seems to have got the act of grimacing down to a fine art. Thankfully Fleabag and Claire get more screen time together, utilising the sisterly dynamic developed in season one. Clifford is the wound-up and neurotic antithesis of Waller-Bridge and the two fit together like snug jigsaw pieces. 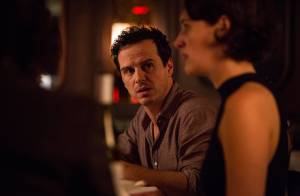 One-off characters are utilised strongly too, with Fiona Shaw making an appearance as Fleabag’s Counsellor whilst Kristen Scott Thomas makes a staggering case for best guest performer with a speech drenched up to go against everyone clinging to the ideology that Fleabag is a show that’s defined by the gender of its parts. Yet all this is used to strengthen the analysis of the protagonists psyche. There hasn’t been this much devastation when deconstructing character flaws since the last season of Bojack Horseman, and whilst there are one or two moments where such expulsions of emotion and feelings feel a tad forced you’re well aware you’re only moments away from another glance into the camera or a sly dig at the judicial system with a Hot Misogynist Laywer (Ray Fearon).

“No. I like that you believe in a meaningless existence” – The Priest.

As stated in the opening however, this arc tells a difficult and presumably-doomed love story, as Fleabag becomes infatuated with The Priest designated to her dad’s second wedding. Whilst his celibacy prevents him from fulfilling her obvious physical needs, Waller-Bridge and Scott’s chemistry on-screen works marvelously in coercing the two together romantically. With dry witty pokes at religion and the often-unnecessary violence of atheism, the show even has a chance to sneak in some poignant subtext that contextualises its fourth-wall breaking format. The Priest is the only person in Fleabag’s life able to notice her ‘disappearances’, and the two trade quips like they’re going out of fashion. And whilst it’s not totally optimistic there’s a genuine passion in the love shared throughout these six, potentially final, episodes. 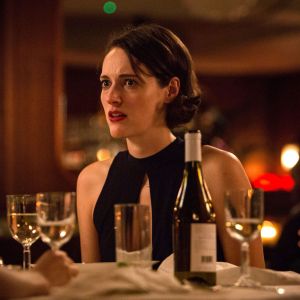 I’m very aware this all sounds like unabashed praise. That’s partly because the show is that good. Returning director Harry Bradbeer keeps the presentation tight alongside the content, and even manages to sneak in some gorgeous cinematography amidst the sex and debauchery. Never has such a pessimistic lifestyle in London looked so good. The accompanying music by Isobel Waller-Bridge hones in on the religious themes at play, with a haunting choir refrain that’s both comedic and impactful depending on where it shows up.

“Don’t make me an optimist. You’ll ruin my life” – Fleabag.

It’s been teased that this is the end for Fleabag. And with that in mind building up to its conclusion a lot of heavy plot threads are left tantalisingly until the final episode. I admit feeling a little worried about the finale, hoping it was able to bypass a lot of the niceties other shows have towards branching pathways and simply tell another simple story that focuses solely on character. Luckily I needn’t have worried. As her Father and Godmother’s wedding day approaches, everything seems to effortlessly fall into place. Claire’s feud with Martin is a devastating breakdown of personality, a defiant fight against those who fail to own their own shortcomings. Fleabag’s Father finally is able to voice his approval of his daughter’s behaviour, and the show that has thrived off of pessimism and bleak intelligence gives in to warmth thanks to Andrew Scott’s wedding speech. 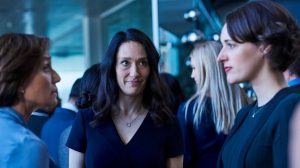 Suddenly we’re aware that the show isn’t a traditional love story. It’s not about the romantic entanglement between two people blossoming over time; no, Fleabag is far beyond that. It knows that tales such as those are a dime a dozen, and risk lying to the audience. No, instead the entire season comes full circle as a story about love. The dangers, the peaks and valleys of it, the incessant need to feel company in a world that thrives off of you being isolated and alone. It’s why people cling to religion. It’s why people sometimes marry individuals they know aren’t right for them. It’s why sometimes it’s worth taking a chance if it can lead to actual happiness for just one moment.

If this is truly the last we’ve seen of Fleabag, then it’s difficult to think of a more perfect ending. The character has outgrown the audience, and instead of relying on us as a crutch to go through life, she walks off triumphant, letting the pain of the world envelop her. Now it appears we’re just gonna have to do the same without her.