1982’s The Dark Crystal exists in a world all its own. Jim Henson and Brian Froud managed to build a world that would rival the likes of Middle-earth, Westeros or any other fantasy world. Or at least…in theory it did. See, the film’s narrative (which took place after a world-changing extinction) always felt lacking to me. Whilst I adored the visuals and the adventurous tone which more often than not turned into hide-behind-the-sofa-terror every time the Skeksis were on screen, I couldn’t help but feel as though Henson had more planned for the world of Thra, let alone the sheer wealth of Froud’s gorgeous illustrations that depicted a living, thriving world unlike any seen on screen before. After the mixed reception too, it appeared that a minor miracle was needed in order for audiences to see the escapades of Thra again…

In steps Netflix and director Louis Leterrier (Unleashed, Now You See Me) who, alongside Jim Henson’s ever-trustworthy Creature Shop, decide that the world needs more magic. Whilst it’s natural to assume that due to the cult nature of the original a restrained budget would have been entrusted upon the team, it appears that the opposite has been the case. For no stone is left unturned in Thra, The Dark Crystal: Age of Resistance is a towering, almost impossible achievement as not only a puppetry-based production, but also as a tale of instant-classic fantasy.

Wisely set before the acts of the 1982 film, Age of Resistance manages to mine writers/developers Jeff Addiss, Will Matthews and Javier Grillo Marxuach’s minds for all they’re worth. Thra, a planet teeming with life and harmonised by an elemental known as ‘the Crystal of Harmony’ is plunged into a tale of fear and war. After a millennium of peace, the Skeksis – a band of horrendous, bird-like reptile creatures (and the keepers of the Crystal) begin to grow greedy with power, having realised the Crystal offers them the chance to achieve immortality. The seven clans of Gelfling (elf-like creatures) who inhabit Thra live peacefully under Skeksis ruling, blind to their growing toxicity. But when the Skeksis begin to use the Crystal to drain Gelfling of their very essence in order to achieve everlasting life, Rian (Taron Egerton), a Gelfling castle guard, witnesses the heinous act and seeks to spread the word of the Skeksis’ true nature. What follows is ten episodes filled to the brim with jaw-dropping set pieces, intricate monsters and a story that feels as warm and wonderful as your worn-out tapes from the 80s.

If there’s one fault in the series, it’s that it begins with an exposition dump worthy of the most heavy-handed fantasy novels. Sigourney Weaver’s voice guides us through the ins and outs of Thra, and whilst it’s slightly daunting to begin with, the narration does a good job at setting up the characters throughout the oncoming journey – including the main trio of Gelfling. Brea (Anya Taylor-Joy) is a Gelfling princess, one of three sisters within the Vapra clan who are the daughters of the All-Maudra (Helena Bonham Carter), the leader of the matriarchal Maudra’s who run the several Gelfling clans across Thra. Deet (Nathalie Emmanuel) however, is an animal caretaker of the Grottan clan, a rarely-seen and presumed-extinct batch of Gelfling who live in the caves underneath Thra, and the first to notice the ‘darkening’ of Thra’s wildlife which sends animals mad due to the deterioration of the Crystal of Harmony. Meanwhile the keeper of secrets Aughra (Donna Kimball), having been away for a millenia, using her psychic abilities to travel across the stars, returns her consciousness back to Thra and is horrified to find the state it’s in under the ruling of the Skeksis. Such interwoven storytelling and world-building is commonplace for the fantasy genre, but Age of Resistance embeds the information by centering it around its character.

For example, the series’ opening episodes familiarise the audience with the terrifyingly-grim Skeksis clan. Mark Hamill and Jason Isaacs are dutifully raspily-voiced in their roles as the scientist skekTek and the emperor skeSo, the former of which cackles his way through his scenes with an aura of fascination. It’s Simon Pegg’s portrayal of chamberlain skekSil however that leaves the biggest impression. His whiny, deliciously-deceitful rise to power and desperation becomes one of the defining arcs across the season, and Pegg disappears behind the voice to the point where I hadn’t realised he was playing the chamberlain until researching for this review. The Gelfling trio all take different heroes’ journeys, with Rian’s being the most traditional. The peaks and troughs of the fantasy genre are leaned into at times, but it’s been years since they felt so fresh. If Netflix is able to bring the same amount of detail and quality to its forthcoming The Witcher series, then it may end up trumping Amazon’s looming Lord of the Rings prequel.

Director/Producer Louis Leterrier presents Thra as a flourishing, bewildering landscape, so infused with life that his camera’s barely able to stay still. The show’s all the better for it, whilst it no doubt made the post-production process harder, such a cinematic and exciting direction for the series elevates the scale and intensity of the action scenes – of which there are many. With every sword fight and creature reveal, another layer of wonder is represented through swooping crane shots and frantic cuts which use the medium’s limitations to its advantage. Whilst there are moments (specifically action sequences) that occasionally border into the unintelligible, the majority are strikingly firm.

Then there are the moments that harken back to classic Henson or even Amblin entertainment, back when family films featured darker moments to scare young ones and show them that a battle cannot be won without there being darkness first. The original The Dark Crystal featured haunting scenes of Podlings being drained of life by treacherous Skeksis, and Age of Resistance has more than a few horror-tinged tricks up its sleeve that push the boundaries of family-friendly without causing any lasting damage. Thanks to a talented voice cast and strong writing too it’s surprising how easy it seems to become emotionally invested in the characters, and much of that is due to composers Daniel Pemberton and Samuel Sim. Their echoing chimes dictate the cheeky, folk-like nature of the Gelfling as much as the storming, weeping orchestral accompaniments supply gravitas to the most emotional story beats. 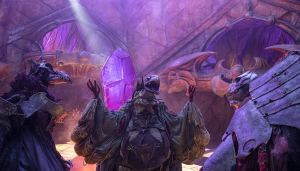 Towards the end of the ten-episode run as stakes are set and already-beloved characters come under fire, it’s often easy to forget the sensational puppet work underneath the storytelling at play. With over 110 different puppets, 60 vast, sprawling sets and a crew of hundreds, the sheer amount of work on display is incredible. But the best work is often that which goes unnoticed, and despite the technical achievement it never really takes precedent over the story at hand. In fact, when finishing the series Netflix reveals a special feature-length look at the behind the scenes process, something that makes the experience in hindsight all the more special. The implementation of over 4000 visual effects shots are interwoven with the live-action puppetry so well that they’re difficult to notice. This is original Jurassic Park-level combinations here. Terrier wisely omits CGI from closeups and focuses more on simply touching up movements of the puppets with technology. It’s practically seamless.

Arguably there are some that will refuse to give Age of Resistance a chance due to its presentation and focus on puppetry, but these are the same people who argue Bojack Horseman can’t be deeply sincere since it’s animated. The Dark Crystal prequel series manages to be the utmost rare thing – a prequel that truly expands on not only the lore but the story of the original text. It may be a crowning achievement in terms of puppetry and it works because it’s in service of such a timeless story. There’s a childlike-delightfulness to visiting Thra, whether it be for the first time or returning from the original, and Age of Resistance is a pure joy to behold.