Following a terrific first season and a pitch-perfect second season was no easy task for The Marvelous Mrs. Maisel. For the first time, the show about Midge Maisel (Rachel Brosnahan) began to consistently show faults in Season 3. Its first two seasons had tough moments, including jokes that did not land and awkward insertions of Midge into on-the-ground grassroots movements. However, Season 3 more consistently introduces such misgivings alongside some of the show’s finest moments, creating a largely good and incredibly funny season but one that is more flawed than its predecessors. Fortunately, it still has the magnificent Rachel Brosnahan in the lead role, so proceedings never stray too far from tremendously entertaining. 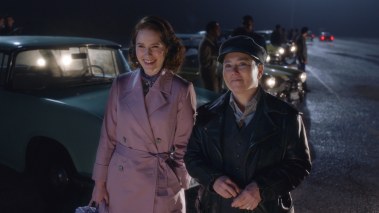 Where Season 3 strays the most is, oddly enough, in its comedy. The show is at its best comedically when it follows a comedy of manners. The trio of episodes set in the Catskills during Season 2 demonstrates this the most. Midge’s standup is great while The Marvelous Mrs. Maisel’s writing team is terrific at sharp wit and funny references, but as a comedy of manners, the show soars. This is provided sometimes in Season 3, but too often feels forced. When Midge’s parents, Abe (Tony Shalhoub) and Rose (Marin Hinkle) move in with Midge’s ex-husband Joel’s (Michael Zegan) parents Moishe (Kevin Pollak) and Shirley (Caroline Aaron) in Queens, this is most evident. Funny, to be sure, but lacking a naturalness that played so well in prior seasons. Ripping these characters out of their natural environment may be necessary to a degree, but it too often serves to highlight the gulf between them and the real world. When surrounded by those that embodied their same privilege, it could be funny without straining for social commentary. Here, once in Queens or in their final days of life in the Upper West Side, The Marvelous Mrs. Maisel strains for commentary about privilege, class, and the political revolution of the early 1960s. It still hits comedically thanks to the performances and talent of Tony Shalhoub, Kevin Pollak, and Caroline Aaron, but this fish-out-of-water setup is at once too typical and too damningly reflective of its characters’ flaws.

The same applies to Midge who, on the road with Shy, is forced to be in new situations. Whether with black audiences or learning about people in the closet, her extreme privilege never helps. The show walks to have it both ways with scenes joking about her extravagant nature, but when surrounded by those who often desperately need help, The Marvelous Mrs. Maisel is tone deaf. It recognizes the strife of those around Maisel, right down to the poverty faced by her manager Susie (Alex Borstein), but the show’s attempt to balance those sociopolitical concerns with its prior comedy of manners never gels. Worse, the show is also incredibly insensitive, particularly towards the Chinese. While portraying a burgeoning romance between Joel and Chinese-American Mei (Stephanie Hsu), it plays in stereotypes about Chinatown, illegal gambling halls, corruption, and violence in the Chinese community. Beyond the insensitivity, The Marvelous Mrs. Maisel is also awkward in handling the development of Susie and Abe. Susie goes through a stretch this season where her every action is dialed to 11, bordering on grating rather than entertaining. Abe’s turn to communism is at times a fun quirk but at others dragged on too long to be entertaining. For all of its highlights, The Marvelous Mrs. Maisel seems uncertain of where the line is, where it is successful, and how long to prolong a bit, fumbling as a result. 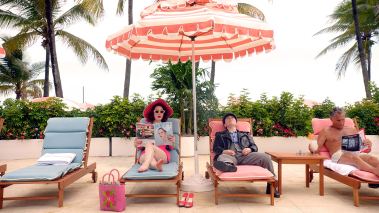 Nonetheless, Season 3 is full of highlights. The season finale, ‘A Jewish Girls Walks Into the Apollo…’ is perhaps the highlight of the series, let alone the season. The comedy is phenomenal throughout the episode with the magnificently talented Tony Shalhoub delivering a great performance as Abe is a highlight. Midge is at her best on stage, delivering heavy-hitting joke after heavy-hitting joke  and winning over the all-black crowd in a flash. As per usual, the camera swings along and dances with the action, with elaborate crane shots creating a whimsical, fantastical feel for the episode. Brilliant lighting further adds to the mystique, a constant throughout the season especially as Midge finds herself in Las Vegas or any other ritzy location. While the season may falter, its mystical and dream-like feeling never wavers thanks to this camera work and lighting. For this season finale, creator Amy Sherman-Palladino layers on emotional pay-offs that are well worth waiting for. Conflicts between Benjamin (Zachary Levi) and Midge or Rose and Midge are both authentically scripted, heartbreakingly performed, and leave the audience reeling. Its final scene, a bittersweet gut punch after all of the magic of the season, is tinged with the reality of the downs of the business as well as the tough spots managers are so often put in by clients. It is a wonder of television, bottling up every terrific trait of The Marvelous Mrs. Maisel and distilling it in a satisfying, hysterical, and poignant package.

Even if it falters more consistently before this point, The Marvelous Mrs. Maisel never ceases to be a vibrant, thoughtful look at the life of Midge Maisel and her crazy family. The theme of independence introduced in the first episode of the series continues throughout Season 3. Reaching pivotal points of their lives – Midge choosing career over being a wife, Rose and Abe thrust out of their upper-class lives, and Joel moving on and forgiving himself – the characters in Season 3 must carve out something that is their own. In many cases, they still mill about in the familiar, whether via unscheduled trips to their old, now re-occupied apartment, Abe’s trip back to Columbia University, or Rose visiting her old Upper West Side friends. Nothing, however, is the same. They have changed, and must work to create something for themselves that is separate from that world. Interestingly, Season 3 shows them at their most dependent, with Midge, Abe, and Rose, all moving in with Moishe and Shirley Maisel until they get back on their feet. Yet, at their core, they are lost and trying to cut out something that can be theirs. Whether it is comedy, politics, a new business, or a fresh start, Season 3 feels like a crossroads. There is some sputtering from the series and the characters, but in these eight episodes they are learning a very harsh lesson: they cannot go back.

At its best when probing those themes and the problems faced by a woman in the male-dominated comedy scene, The Marvelous Mrs. Maisel’s third season is still funny. It has a sharp wit and a tremendous cast led by Rachel Brosnahan, Tony Shalhoub, Marin Hinkle, and Kevin Pollak, who ensure it never wavers comedically. Add in a welcome stretch of time spent on tour hanging out with Shy Baldwin (Leroy McClain) and The Marvelous Mrs. Maisel is as comfortable as it is funny. However, socio-political commentary and some questionable racial politics leave the third season far more flawed than its predecessors. This is a show that traffics in nostalgia with a fantastical feeling, something its third season tries to balance with a wide-eyed realization about how out of touch its characters actually are from real suffering. Never quite landing in the way it should, this commentary and some poor characterization choices leave this as a good, but not great season for The Marvelous Mrs. Maisel.