During my recaps for the first season of Kidding, I remember saying that I wanted an entire episode set within the fictional show of its protagonist ‘Mr. Pickles’ Puppet Time’ and if this is the closest we get… I’ll still be extraordinarily happy.

After Jeff’s nihilistic but incredibly endearing Christmas speech at the White House, the talking Mr. Pickles doll quickly shot up in sales and became the best-selling toy of the season. Jeff’s dad and boss Seb (Frank Langella) is seen taking meetings for other toys based off the property, like one, er… pickle-shaped doll that does nothing but reinforce the strength of a good phallus joke.

“My research shows that children who enjoy this toy are 43% more likely to eat a dick.” – Seb Piccirillo

Meanwhile at the hospital Will asks Jill in the hospital waiting room whether they donated Phil’s organs when he died. She tells him she couldn’t, because whoever ended up with them would then be extended members of the family. We’ve seen this before with Denny and his daughter last year, Jeff’s humanitarian nature gives him an obsessive need to take care of these people and have them as a part of his life, and it’s a nice introduction to the narrative surrounding Peter we’re in for this season.

The main crux of the episode is set during the surgery, however. As Jeff slowly loses consciousness his surgeon tells him that she wasn’t a fan of his Christmas speech. A magpie lands on Jeff’s chest as the music thumbs and vines sprout from the ground below the operating table – we’re in Pickle Barrel Falls now. The same place Jeff found himself in his mind when he ran over Peter, but this stay seems more deliberate.

Kidding steers fully into the fantastical here with a joyous glee. Writer Michael Vukadinovich and director Jake Schreier elongate the stretch of forest and waterbed to encompass the entirety of Mr. Pickles’ TV town. But its inhabitants aren’t happy to see him, as everyone from Snaggle Horse to Ennui start fearing for their lives and hurling verbal abuse at their creator. They definitely don’t get their use of explicatives from him, that’s for sure.

“The word of the day in Pickle Barrel Falls is ‘Vehicular Manslaughter’!” – Snaggle Horse the horse

The seamless and vivid flashbacks return from the previous episode too, as we’re shown more of Jeff and Dee’s home-life after their mother runs away. Her singular postcard from Niagara Falls instantly tells us where the idea for Puppet Time came from. It’s instantaneous and devastating visual storytelling that rains down the melancholy in an episode that, again manages to find the right balance between funny and sad. 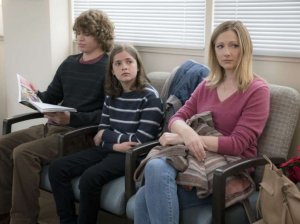 Young Jeff running off and verbally/physically attacking his father for his mother’s disappearance for example, is sad, yet older Jeff worming his way through the woods of Pickle Barrel Falls to find a rocketship to the top of the falls at Launchpad Lake is so child-like in its whimsy that you almost forget this is all happening within a very sick mind. Unfortunately the ship is out of gas, but it’s here where Peter arrives via Pickle Barrel from the sky, confused, angry, and very conscious of what Jeff has done in the real world. It just doesn’t sound so serious because he begins to sing his anger out. His body is accepting Jeff’s liver and in turn, becoming a part of how Jeff reacts/deals with things. Amidst a series of punches and violent outbursts, Peter bellows (with a remarkable rhyme scheme and backup from some of Pickle Barrel Falls’ residents) that Jeff needs to start accepting his emotions like a normal human being and showing them. It’s not quite on the level of Vivian’s transformation into a puppet last season, but it’s enough to melt the heart of any Jim Henson fan that’s for sure.

“Jesus is your vocabulary stored in your liver?” – Peter

Taking Peter’s advice, Jeff admits his insecurities through song. Each of them is a personal revelation, from the doubts surrounding his hairdo to his hatred of his father all leading to the crescendo of him realising he still blames Jill for Phil’s death and hates that he can never forgive her for it. It’s a devastating moment for Jeff that’s sold by Jim Carrey perfectly, even down to the clasping of his hands over his mouth. The truth’s out now and he can’t hide it from himself. This release of emotion charges up the rocket, and Peter stows away in it on his own leaving Jeff hopeless to make his way up to the top of the falls.

Back at the hospital the media continue to adore Mr. Pickles over his seemingly selfless act of donating his liver. I made comparisons between Kidding and Bojack Horseman in my review last year but I continue to argue that the show could eventually build up to the live-action version of the horse’s trailblazing show. Both Bojack and Jeff are caught in the aftermath of terrible deeds and it’s only a matter of time before people know the truth. Hell, as Seb arrives at the hospital he even compares his son to Secretariat in blood: is this a nod from showrunner Dave Holstein to the now-complete masterpiece? Who knows, it’s very cool if it is, though.

Jill tells Dee and Seb that she wants Jeff to stay away from her and Will, whilst the Piccirillo’s do what they do best and try to turn the situation back on Jill. Now, they both work in the television industry so it’s not a long shot that they’re both adept at spinning stories but I never considered the two of them to be… evil before. Combined with Dee’s shady words of wisdom last week it seems as if the two of them are purely interested in keeping Jeff on this tightrope between a breakdown and stardom as long as possible. It’s only an angered and desperate Jill who, whilst warning the man to stay away, manages to speak up for his soul when Seb argues that Puppet Time will be back on the air shortly.

“The show is an endless trap denying [Jeff] his humanity” – Jill 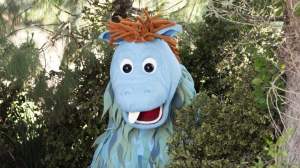 This is all through a quickfire burst of dialogue where Frank Langella’s Seb gets the most dry and hilarious material. Whether it’s offering condolences to Jill for her still-alive husband’s passing or bragging about his parenting skills to his daughter who’s currently going through a devastating divorce, Kidding makes it easy to see Seb as both a victim and a bastard. Back with young Jeff and Dee we see a prototype of Pickle Barrel Falls Jeff builds for Dee to cheer her up over their mom, but he can’t figure out how to get up and down the falls themselves to see her. In steps their father with a parachute-covered pickle barrel, perfect for travelling. It’s simultaneously an act of compassion and good business, and one that set their entire careers in motion and ended up as a cage that imprisons Jeff even now.

Meanwhile Jeff’s still stuck in his own mind throughout the surgery, but luckily one Falls resident hasn’t given up hope. Hopscotch the sasquatch (charmingly voice by Dick Van Dyke) offers him a lift in his giant hand, and it’s a lovely visual that’d seem silly anywhere else but effacing here. The effects work, both practical and digital is astounding and really creates a unique and small fantasy world I’d love to see more of in the future. As Jeff looks out over the falls and Hopscotch sings of his relationship with Mr. Pickles there’s a resounding positivity to this instalment that feels unending. We were shown last season that each of the Pickle Barrel Falls residents represents one of Jeff’s real-life friends/family members, and it’s clear that Hopscotch is the best-case-scenario of Seb.

That makes it all the more devastating when after reaching the top of the falls, Jeff finds a cabin where his and Dee’s younger selves are trapped within the commercialised playpen that their father has put them in. When he’s up the falls Jeff’s anxious, when he’s down them he’s free. It’s difficult not to get worked up as Carrey’s performance swells and he vows to be a better person, because you know that by ‘better’ he means more realistic and less altruistic for his own (and other peoples’) health. And it all starts with him firing his father the moment he wakes up from his surgery…

If Kidding can manage to keep up this quality throughout this run, I think we’re in for a treat. I just hope that they continue to push the emotional strengths of their characters as far as possible.