As Doctor Who prepares itself for the finale of the twelfth (revived) season, ‘Rise of the Cybermen’ feels like a playbook of grandiose plot points that are often underutilized, failing to make a lasting impression despite the admirable aspirations of those involved.

We begin things with a promising pre-title sequence set to Patrick O’Kane’s Ashad’s voiceover, pre-empting the return of the mighty Cybermen as we dive into the scattered remains of their bodies littered throughout space. It’s a suitable epic and haunting display that maybe got my hopes up for the apocalyptic battle ahead, as very soon we’re told that we’re in the aftermath of the Cyber-war, in which humanity is essentially extinct apart from a rogue band of survivors The Doctor and fam show up to assist. 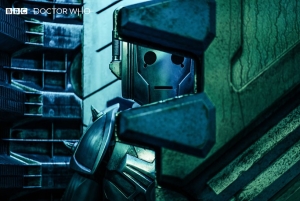 I feel like I’m the only one who has a problem with this initial setup. Doctor Who has spent over half of its episodes trying to save humanity, and yet the rugpull that the species is pretty much doomed is just dropped onto our laps. After ‘The Haunting of Villa Diodati’ I assumed we were going to get some form of explanation as to why The Doctor failed to stop Ashad’s quest to revive his people with the Cyberium but alas, it seems as though Chris Chibnall was fresh out of a reason. Still, we could have at least been given a line explaining the war as a fixed point in time in order to make the stakes seem anything other than short-changed.

Each TARDIS member carries their own gizmo with them, each detailing a previous way The Doctor has defeated the Cybermen (their allergy to gold, disrupting their emotional inhibitors and creating a forcefield), which allows for a nice little callback to the show’s history with the villains whilst also showing us how powerful they are now. Especially when a fleet of Cyber drones (just the heads of Cybermen which looks… strange) shows up and destroys everything and dwindles the human population even more. Trapped in a small colony with only a handful of survivors as Ashad and more Cybermen show up, the group is split in two. Graham and Yaz go with the humans in a makeshift escape-pod, whilst Ryan is trapped with The Doctor as she tries to buy them enough time to escape. What should feel like last resort actions due to their dire situation instead often feels random. We’re told the stakes are high rather than being shown them.

Jodie Whittaker continues to unleash more of her darker tones as she cuts off her friends and infers superiority, yet it’s still undercut by her breathless monologues of childlike bickering that fails to find comfortable middleground. Tosin Cole’s Ryan is given the chance to become more fleshed out this week, as he and The Doctor confront Ashad and are given the primary story. Speaking of Ashad, O’Kane’s performance continues to be the menacing, scenery-chewing villain that last season’s Tim Shaw wishes he could be. The episode wisely keeps the number of Cybermen limited to his two bodyguards, allowing him to wear the brunt of the conflict and storm after the survivors with a (literal) iron fist. 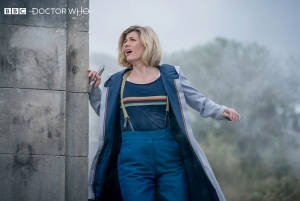 As for the survivors themselves? They’re taken from the show’s archetypal back-catalogue. Yedlarmi, Ravio and Bescot (Alex Austin, Julie Graham & Rhiannon Clements) hijack a Cyber shuttle with Yaz and Graham as they fly off into space and find themselves trapped on an abandoned Cybercarrier from the war filled with thousands of dormant soldiers inside. Yedlarmi watches as his mute brother is killed during the Cyber drone attack, and it’s this fear that drives him on. Ravio toughened exterior has some nice moments of pathos with Graham’s salt-of-the-Earth playfulness when they initially explore the Cybercarrier too, but the combined trio mostly serve as heightened cannon-fodder. This is a shame, especially considering how important they are.

As Ashad follows the survivors, The Doctor, Ryan and survivor Ethan (Matt Carver) head for the mystical ‘Ko Sharmus’ – an apparent haven where ‘the Boundary’ is – a portal that takes you to another random point in the universe and a place where the Cybermen can’t follow. There, along the windswept coastline they find that Ko Sharmus is actually a person (Ian McElhinney), and that he guards the boundary after choosing to stay behind in order to help potential humans find their way to safety. It’s an admirable goal and one that’s left him with a lifetime of solitude. This ‘Boundary’ plot device is presented and then shown within the space of about ten minutes, and The Doctor’s insistence that the group don’t have time to make it to the TARDIS in time but are able to hijack a Cyber shuttle and find Kor Sharma is questionable to say the least. As efforts to save the human race go, this probably ranks as one of The Doctor’s worst efforts. 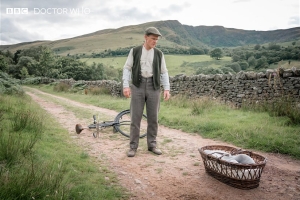 There is an enigma splintered throughout ‘Ascension of the Cybermen’ though that plays into Chibnall’s strengths and actually generates continued intrigue. We’re repeatedly taken back to the Irish countryside, as farmer Michael (Andrew Macklin) comes across an abandoned baby in a basket in the middle of the road. After reporting it to the police he takes it back home with him as he and his wife adopt baby Brendan (Evan McCabe) and give him the most idyllic life you could hope for in old-timey Ireland. As the first of a two-parter, it’s not uncommon for contrasting threads like this to be plotted throughout, but as of now we still don’t know the importance of Brendan and I think his story is the most interesting part of the story by far.

Not only does he grow up to be an officer in his small coastline town, but after falling off a cliffside on duty he miraculously survives, seemingly immortal. Fast forward to retirement and Brendan is given a clock as a parting gift, just before being welcomed by un-aged companions throughout his life and is submitted to torture. Why is Brendan immortal? Is he a time agent like Jack Harkness? The gift of a clock upon retirement echoes Jack’s past and the character’s return in ‘Fugitive of the Judoon’ led many to believe he’d be showing up again in this final two-parter. Initially I thought him to be Ashad pre-conversion, though the physical differences count that out as a possibility. It’ll be interesting to see how Brendan fits into the overall story, especially considering how it all ends…

Whilst Graham and Yaz are busy being incessantly optimistic in the face of doom as they’re slowly being hunted down by a revived army of Cybermen, The Doctor activates the Boundary, only to find a broken Gallifrey on the other side of the portal – much to the shock of Kor Sharma. Then before you have a chance to connect any of the dots, Sacha Dhawan’s Master plows through, grinning ear to ear continuing his promise that everything The Doctor knows is about to change. 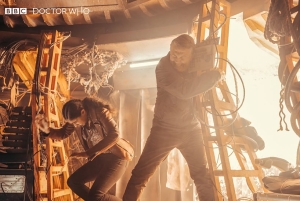 It’s another example of the show dropping one plot in order to tell another at the last moment, something this season in particular has been guilty of a number of times. Dhawan’s Master is less erratic in his short appearance here, and Whittaker’s Doctor instantly reverts back to her stoic and cautious side. If the two of them can keep up the chemistry we saw glimpses of in ‘Spyfall: Part Two’ then there could be hope for the finale yet. However as it stands, ‘Ascension of the Cybermen’ leaves an awful lot hanging in the air. I’m hoping Chibnall can form a cohesive narrative whilst juggling several of the plot threads he’s been building towards, because at the moment all there seems to be are more questions. It’ll also be interesting to see how much of a role the Cybermen play in the finale, and whether they actually contribute to the destruction of Gallifrey or if they’re just a red-herring.

It’s almost time to find out about the Timeless Child…