After the dreamlike sheltered surrealism of ‘Episode 3101’ we crash back down to Earth and the ramifications of Jeff’s actions in Kidding as the Filipino Mr. Pickles is murdered by the state police for preaching the practice of divorce in a country where it is outlawed. Over in the US Jeff is hounded during an interview over the events, and is particularly caught off-guard when questioned about his role in Fil’s death, mistaking the question for his deceased son. We all know how compassionate Jeff is, and when he finds out they’re burying him at sea there’s no doubt he was going to attend the service… we just don’t know how bad the whole thing will go.

It turns out very bad indeed. This week’s script by showrunner/creator Dave Holstein brings back the mixture of sweet and sour humour and melancholy we’re used to by now. It’s a slight episode that occasionally seems trivial, but that’s mostly due to the outstanding work with the previous instalment. Instead, Holstein and returning director Michel Gondry serve up a chaotic and haphazard plot as the characters head out to sea. 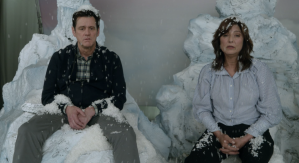 Seb meets with Dee in her weirdly discomforting and clinically-white office to discuss her handling of the situation. As the new head of the company Catherine Keener’s Deirdre has begun to stockpile extra instances of stress to the point where she doesn’t even have a chair in her office. Seb’s ever-watchful and critiquing eye is always watching, and his disappointment seeing Snagglehorse on television selling mortgages can’t be exaggerated. The empire he’s created is falling down to a limp under his own children. Frank Langella has mastered the art of dry wit, and always dispels his cynical one-liners with the aura of a wise monk being forced to tell a harsh truth. His inability to praise his children is his ultimate downfall, and it’ll be interesting to see how post-Puppet Time Seb carves out a new place for himself in Kidding.

Meanwhile Jeff is getting death threats and confessions of broken homes via his Listen-To-Me Pickles doll, and sees the burial-at-sea as a short chance of escape. But he needs his passport, which is back at his old house. He bumps into Justin Kirk’s Peter who, after asking if he wants to co-own a show dog with him, tells him he’s going to propose to Jill, to which Jeff simply hugs him and tells him the hug is complicated, but genuine. After the emotional closure of signing the divorce papers in the previous episode, it feels as though Jeff is finally making some progress as a human being. This flowering friendship with Peter is a huge step, and his insistence that Jill goes on the surprise trip so that Peter can propose is a sign that he’s able to feel comfortable enough in his own skin without retreating back into the Mr. Pickles persona. That, and Peter’s declaration that the two are ‘liver brothers forever’ is adorable.

“If you want to fix this, you have to think of Jeff as a child” – Seb Piccirillo.

After grabbing his and Will’s passport to spare him from being there at the proposal, we’re then thrust back into the strangely fantastical as Will secret library book on time-reversal seems to be telling the truth. The numbered dates on the library stamp turn out to be Fibonacci sequence numbers, each signifying an important event. Not only that, but thanks to Will’s stoner friends (who are now sipping weed, no doubt thanks to Jeff’s influence) we learn that the numbers themselves are counting down. Does this mean Will’s hacked space and time? Definitely not, but such coincidences are there to remind us of Will’s fragile emotional state and his young age, both of which come into play as they take a helicopter out to sea.

Cole Allen and Jim Carrey have some of the best chemistry on the whole show, and Jeff’s recommendation for Will to be a future Pickles (which he accepts) is a stark reminder of how much the boy still looks up to his father when he makes the right decisions. It just so happens those decisions are made in the same car as the camera crew from 60 Minutes. Onboard the ship itself, Filipino Pickles is buried inside a Pickle Barrel after a send-off from his fellow incarnations. It’s as bizarre as it sounds and the eclectic mix of characters reminds me of how I’ve always imagined a clown funeral.

However when giving the eulogy, the other Pickles condemn Jeff for his careless actions and his handling of the business. Not only that, but Pickles-San’s brother is present, and accuses a dismissive Dee of raping his brother, who is now missing. I was wondering what the fallout of their sexual encounter would be, and it turns out to be just another plate that Dee has to keep spinning before her eventual downfall. After all quitting their roles and finding a hidden stash of alcohol the band of Pickles go crazy, zip-lining naked across the ship and shoving their tongues down each other’s throats. It turns out promoting a life of monogamy and altruism really leaves you with some pent-up sexual regression. Even Pickles-San’s brother attempts to get with a female Pickles only to be blocked by Seb himself, in what can only be described as an oddly incestuous affair within the ship’s lavatory. Jeff’s own dad is literally screwing him over, and Langella plays it with the composed stature of a mafia don throughout.

“Didn’t you hear? Their God is dead, the priests are thirsty and this ship is about to dock in Gomorrah. No one can help us now” – Seb Piccirillo.

Dee throws the 60 Minutes equipment into the ocean to avoid further spectacle, whilst Pickles-San’s brother taunts her with quotes from The Princess Bride ‘My Name is Pickles-San. You touched my brothers’ penis. Prepare to die’. Inside however Jeff is spurred not to give up on Jill by a young and optimistic Will, whose world comes crashing down upon the reveal of Peter’s proposal. It’s destroyed his plan to get his family back together and proves that he isn’t capable of magic. It’s easy to forget due to his maturity and his actions that Will is still a young man. His hope of one big happy family seems naïve, but it’s from the same emotionally stunted brain as the rest of his family. In the heat of the moment he even tells Jeff to try hitting Peter with his car again to get rid of him, a statement he obviously doesn’t mean but he’s so caught up in the magic fantasy of his time-travel book that it’s easy to leave reality by the wayside.

‘The Death of Fil’ isn’t Kidding’s strongest instalment, but it moves a lot of pieces forward. Jeff and Will’s relationship has been smooth for too long, and whilst Jeff’s growth is good for him personally it might just end up costing him the last ounce of respect from his son. When Will drops his Pickle tie alongside the others, three ringing gunshots go off to sink Fil’s pickle barrel. Of course, we know what they really mean…