ITV Studios have made many miniseries in the last twenty years focusing on notorious British murder cases. The latest of these is based on the book Killing for Company, a biography written by Brian Masters about Scottish serial killer Dennis Nilsen. 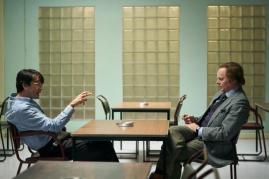 The series begins with DCI Peter Jay (Daniel Mays) responding to a call to one of the infamous addresses where Nilsen carried out some of his most atrocious acts. Suspicious of potential human remains found in a drain blockage, Jay waits for the resident who complained to the landlord about the drains to return. Later that day, Dennis ‘Des’ Nilsen (David Tennant) returns home and Jay requests to enter his flat, which Nilsen does not contest. When entering the premises, Jay is overwhelmed by a smell, which he instantly recognises as a decaying corpse. He immediately asks Nilsen where the body is, and Nilsen unflinchingly states that it is in the wardrobe. Following his arrest, Nilsen continues to comply with the police, telling them various details about his crimes. However, while Nilsen is awaiting trial in prison, tensions grow between him and Jay as Nilsen begins talking to his biographer, Brian Masters (Jason Watkins), and becomes progressively uncooperative.

It is interesting to watch a crime drama where the killer’s arrest happens from the outset, and because of this Des is a captivating drama focusing on the characterisation of Nilsen. The audience is intrigued by Nilsen’s behaviour and how it changes throughout the three-part miniseries, and this is in no small part due to Tennant’s performance. His articulate delivery combined with his calm and controlled persona makes Nilsen enigmatic but simultaneously unsettling to the audience. Both Mays and Watkins add to this disturbing feeling with their subtle expressions displaying unease in his presence. It is fascinating watching their perceptions of Nilsen develop.

Des presents an intriguing division between subjective and objective views. Masters states that he wishes to give an account of Nilsen’s story representing only the facts. However, he finds it impossible to ignore formulating opinions about Nilsen because of his startling behaviour. It displays the difficulty people have in brushing aside their thoughts and feelings about a person accused of a crime.

Due to the grim plot and presentation, Des is not a joyful watch, but it is gripping. It also does not attempt to glamorise Nilsen, and the series shows the true story sensitivity and care. Des is well worth watching, even considering the unsettling subject material and disconcerted feeling it creates.