Jonathan Nolan wasted little time in bringing us the first season of Westworld, the show premiering mere months after his prior sci-fi television show Person of Interest concluded. Nolan co-created Westworld with his wife, Lisa Joy, and plays a more hands-on role in Westworld, personally directing and/or co-writing the majority of the season’s episodes. We notice his influence- previous writing credits of his include The Prestige and the story for Memento– in the complexity of Westworld, a show that is not only biblical in scale, but also biblical in narrative. 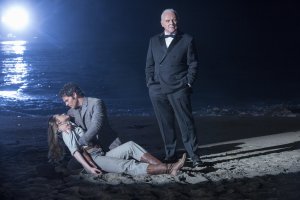 Based on the Michael Crichton film of the same name, Westworld is a story of scientific-discovery-gone-wrong (or, right, depending on your perspective). Westworld was created by Arnold Weber and Robert Ford (Anthony Hopkins) to be a Wild West-themed amusement park where “guests” could do to android “hosts” whatever they please without fearing consequence. Lie, steal, rape, murder. Any vice. The hosts are programmed not to harm guests and they lack sentience despite their total resemblance to humans.

Before the amusement park was opened to guests, Arnold attempted to shut down the park, believing that the hosts could acquire sentience. That the hosts, with their programmable strength, intelligence, and pain tolerance amongst other qualities, could be the evolution of the human race. Arnold ultimately perished in his attempt to illustrate his belief and Ford allowed the opening of the park nonetheless.

True to its name, Westworld resembles the Wild West with location shooting taking place in Utah and California. The uncanny valley is a recurring theme throughout Westworld accented not only by sci-fi posing as the Wild West, but also through the music a player piano in the Sweetwater saloon plays. Ramin Djawadi, known to many of us for his Game of Thrones compositions, composed the music of Westworld, including minimalist piano and string renditions of familiar songs such as Soundgarden’s ‘Black Hole Sun’, The Rolling Stones’ ‘Paint It Black’, and Nine Inch Nails’ ‘Something I Can Never Have’. These songs are stitched to dramatic scenes as eerie counterpart.

Another song utilized periodically through the season is Claude Debussy’s ‘Reverie L. 68’. The title of the piece references a piece of code that Ford inputted into the hosts’ code. A reverie, according to Ford, is a slight motion or instinctive movement that a host may have in response to a particular stimulus. Inserting reveries into the hosts’ behavior allows them to better resemble human behavior. However, since he inserted the code, hosts have been malfunctioning and it is feared that since a reverie is created in reference to a previous stimuli, that hosts are able to have a greater sense of ‘subconscious’ or ‘memory’.

Despite having thousands of hosts, the storylines of two in particular are centered on. Storylines are repeated story arcs that the hosts unknowingly act out every time they are utilized. If necessary, they are repaired in the lab and returned to Westworld. Otherwise, they reset after their story arc is completed. Sometimes, to keep the amusement park different for every visit, a host is assigned to a different or new storyline.

Dolores (Evan Rachel Wood), the first host who was created, is an otherworldly presence, her sky blue dress and gentle demeanor as the farmer’s daughter contrasting greatly with the grit and violent atmosphere that Westworld evokes. Her storyline is a tragic one, her lover and protector Teddy (James Marsden) returning to her only to witness some horrible incident that finds its way to occur to her family or herself. Maeve (Thandie Newton), the madam at the Sweetwater saloon, is the second host Westworld is centered upon. The series runs dangerously close to succumbing to a familiar plague in HBO shows, but both Dolores and Maeve are able to escape their storylines, Dolores with the assistance of two guests, William (Jimmi Simpson) and Logan (Ben Barnes), who vicariously experience Westworld for us (although their narrative becomes much greater than it would appear at first), and Maeve as she becomes aware of her ‘hosthood’ and plots her escape from Westworld. Over the course of their storylines, they interact with a mysterious Man in Black (Ed Harris) who is infamously cruel and sadistic to the hosts in Westworld. His visit is informed by his search for a maze, an object of mystery to characters throughout the season, but more specifically what is at the center of that maze. Various cast members of Westworld, particularly Evan Rachel Wood and Thandie Newton, alternate skillfully between acting that appears mechanical and naturalistic acting.

Various philosophical and psychological themes are explored in Westworld, in particular the theory of the bicameral mind. Before his death, Arnold had programmed hosts to hear ‘the voice of God’, the hosts believing that they are hearing from him, their creator. It was his hope that the hosts would realize that this voice was their inner thoughts and that they would recognize their consciousness.

While Westworld is very rewarding to diligent show watchers due to the show’s complexity, it is best enjoyed with a certain amount of suspended disbelief. Despite appearances, Westworld acts best as a mystery rather than a science fiction story. Layer upon layer of mystery is piled onto viewers, and we soon realize that a number of the show’s characters are often deliberately enigmatic, even to those they are helping. Westworld uses filmic techniques superbly to sustain the show’s mystery, choosing what to show and what to hide, and using misleading cinematographic techniques in a way similar to Denis Villeneuve’s film Arrival.

If Westworld is to become HBO’s next flagship series- and viewership numbers certainly indicate it will be- eventually answers to longstanding mysteries will have to be provided. But for now, we’re in for a ride. Hold on to your white or black luxury cowboy hat, embark on a bounty hunt for a rogue host, do whatever you need to do. Because in Westworld, that’s what done.