Mark Twain famously said, “Truth is stranger than fiction, […] because fiction is obliged to stick to possibilities; truth isn’t”. In their original 1996 film Fargo, the Coen brothers took Twain’s quote to heart by including the patently false claim that the events their film depict are true, allowing them significantly more creative freedom without incurring audience disbelief. Showrunner Noah Hawley has retained this notice throughout his spiritual companion series Fargo, but this season he has done something slightly different. In the first two seasons, the opening line “This is a true story” fades to leave the word ‘true’ last, focusing the audience’s attention on the actual events of the story and the absurdity of them ever actually occurring. Here, however, Hawley draws our focus to a different word in the now familiar title card: ‘story’. 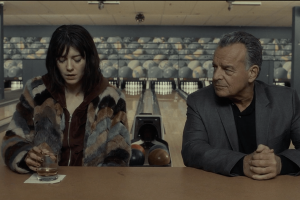 Set in Minnesota of 2010, this third entry is a much smaller and layered story than the expansive mob war of Season 2, choosing to instead follow a dispute between two brothers, Emmit and Ray Stussy, both played by Ewan McGregor. It’s a tale taken straight from the Old Testament: as children, Emmit and Ray received gifts from their dying father. Emmit, a cherry red Corvette; Ray, a valuable postage stamp collection. Emmit, seeing the long-term opportunity of Ray’s gift, convinces him to trade, and ultimately uses the fortune made from selling the stamps to fund a successful parking lot business. Ray becomes a rather unsuccessful parole officer, and like Esau in the Bible, realizes he was cheated by his brother and grows to resent him. With the support of his crafty fiancé Nikki Swango (Mary Elizabeth Winstead), Ray hires one of his parolees (Scoot McNairy) to rob his brother of the last stamp in the collection. Like all seasons of Fargo, violence and hilarity ensue, resulting in a continuously escalating feud fueled by a painfully ironic lack of communication.

In addition to dealing with his brother, Emmit is also introduced to the unscrupulous V.M. Varga (David Thewlis), from whom he borrowed money following the financial collapse of 2008. Varga, a white-collar criminal who dresses like a second-rate salesman, quickly reveals to Emmit and his lawyer (Michael Stuhlbarg) that he did not in fact provide a loan, but an ‘investment’ to force his way into Emmit’s business and embezzle massive amounts of money. Varga is truly a repulsive character, both in appearance and personality, and is undoubtedly the most compelling villain the show has seen since Season 1’s Lorne Malvo (Billy Bob Thornton). He and his two cronies (Goran Bogdan, Andy Yu) swiftly invade and violate Emmit’s public and personal life, forcing him to endure their illegal activities with the promise of becoming wealthy beyond measure. On the other end of the moral spectrum is ex-police chief Gloria Burgle (Carrie Coon), this season’s incarnation of the classic Fargo strong female cop, distinguishable from previous characters of her type by her more overtly hostile attitude towards the world.

After the grand, almost epic scale of Season 2, Noah Hawley has withdrawn the show’s magnitude this year, and appropriately so. It would be wrong to say this season isn’t as ambitious as the previous two, but it is admittedly much quieter in its approach. The main distinction between Season 3 and its predecessors largely revolves around its method of storytelling. In Seasons 1 and 2, twists and turns in the story defined each episode. Season 3, on the other hand, holds the spotlight on a small cast of mutually related characters and the impact their actions have on each other. Though there are some unexpected developments, the pace proceeds at a mostly steady grind, allowing the tension to take its sweet time to grow across ten episodes. With less frequent violence as well, character deaths swing a heftier punch. The endings of Episodes 5 and 6, for example, are effectively shocking for this very reason. Despite being more invested in these characters, it’s also the funniest season yet, in its own, Fargo way.

After two mostly straightforward seasons, Hawley must have realized the necessity of innovating the core ideas and execution of Fargo in order to prevent it from becoming formulaic or stale. The new color scheme is the most obvious of these advances. In an official interview, Hawley stated that he wanted it to be impossible to confuse a shot of one season to another, for there was to be a distinct, visual style for each iteration. Season 1 was the most realistic in its colors, not emphasizing any specific shades; Season 2, in contrast, is much harsher, bringing out the rustic browns and washed-out reds reminiscent of the late 70’s era. This season, Hawley has instead opted to pull out blues, indirectly bringing out reds and oranges through contrast. Despite emphasizing these warmer hues, the color design manages to give the cold Minnesota landscape an even bleaker feeling than before, like the emotions of every scene have been muted. It’s an incredibly draining and depressing look, but also some of the most cinematic toying with color found on television. 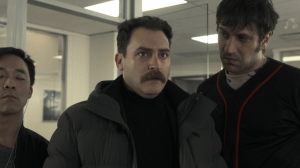 Hawley has also breathed new life into the show by injecting stronger doses of surrealism, a feature fans will remember being slyly introduced in Season 2. Ray Wise, known in the television world for his role as Leland Palmer in Twin Peaks, has a small part this season as Paul Marrane, a stand-in for the mythical “Wandering Jew” figure. Several of the principal characters encounter Wise’s character in a variety of situations, and his enigmatic conversations with them exude a peculiar omniscience. In Episode 8, there’s a bizarre scene in a bowling alley bar (a reference to The Big Lebowski) where Wise talks with Nikki and one of Varga’s henchmen separately, quoting scripture and offering ominous judgement. The meaning of Wise’s character and the surrealism is puzzling for sure, but it undeniably offers an entertaining and captivating watch.

Fargo’s third season is also much more a product of its time than either of its predecessors can claim. The 2010 setting is the show’s most recent yet and its references to the 2008 financial collapse, and all the painful confusion it caused, are still fresh wounds today. Furthermore, its atmosphere of turmoil serves as a clear spiritual substitute for the political volatility since the 2016 Presidential Election. Like Emmit’s disorientation from Varga’s invasion of his life, many Americans felt their world turned upside down by Donald Trump’s victory. There’s a quote made by Emmit’s lawyer Sy Feltz in Episode 7 that feels particularly pertinent: “The world is wrong. It looks like my world, but everything’s different.” Varga’s derogatory tirades about immigrants and Jews, along with his Orwellian questioning of truth, also feel frighteningly relevant. David Thewlis himself has said in an official FX video that the show has felt “rather topical in a way” to the issues of 2017.

At the conclusion of the original film, Marge Gunderson (Frances McDormand) asks Peter Stormare’s stoic hitman about the point of his violent actions: “And for what? For a little bit of money? […] And here ya are, and it’s a beautiful day”. For all the darkly comic mess the movie makes, it isn’t laughing here. The Coen brothers are quite bluntly questioning the evil people are willing to commit for greed, for ‘a little bit of money’. Each season of Hawley’s adaption has recreated the tone and message of this scene, complete with the firm affirmation that, no, wickedness does not go unpunished. Season 3 doesn’t do this. In its final moments, Gloria and Varga sit in an interrogation room with mirrored walls, sending reflections of their figures into infinity, suggesting an eternal quality to their conversation. Several years have passed since the main events of the show, and Gloria has finally caught the bad guy. She taunts Varga that he is going to prison, but he insists that he will be let free. They both stare at each other smugly in silence, both sure of their outcome. Varga’s face fades into darkness, and the clock on the wall ticks on. This is the closest we get to a moral reckoning. At their cores, Gloria and Varga represent the opposing forces of America: the humble citizen and the ruthless entrepreneur. Peter and the Wolf. Good and evil. Both are sure that their vision of the world is the truth and that they will win. Many viewers have said the ending is a cliffhanger, but that’s ultimately not what it represents. The eternal clash of good and evil is the ending. It’s what Fargo has been about this entire time.

Despite all its unique vision and creative changes, this season of Fargo somehow doesn’t feel as compelling as the previous two. Thinking about the season retrospectively as a sum of its parts, it’s undeniably a fantastic piece of television, but in the moment of watching it you’re left with a slight feeling of “that’s it?”. Unfortunately, the feeling is likely the result of expectations interfering with enjoyment, a problem anthology shows face in general. When audiences get used to a certain type of story and method of telling it, and those both change suddenly, the effect can be disorienting and disappointing. If this is the final season of Fargo, I can’t say that I’m necessarily disappointed. The trilogy has been one of the most tightly written, darkly hilarious, and inventive television series in recent memory, and its legacy will certainly live on.