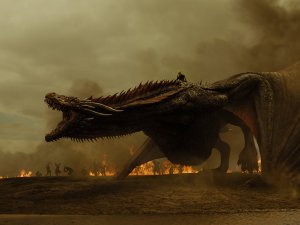 Perhaps the biggest mystery facing viewers at the close of Season 6 was pondering just how showrunners David Benioff and D.B. Weiss were going to conclude Game of Thrones in only thirteen episodes. Now, a new season come and gone, and we’re left with an even lesser number of episodes remaining- six- to wonder the same thing.

That being said, Game of Thrones (Season 7) marks a turning point in the series and departs substantially in structure from prior seasons. Episode-length battle sequences (particularly in the second to last episode of a season) are no longer feasible and communication by raven or travel by boat, foot, or dragon that would normally occur over the course of several episodes in the past now takes place in minutes. Everything is compressed and while this does advance the narrative at a faster pace, it does stunt several elements of storytelling, in particular character development and believability of plot (see: ‘Beyond the Wall’).

Watching Season 7 is akin to viewing a highlight reel, the most impactful and plot-progressing scenes shown to us throughout the season while other moments yet relevant are unscreened (anyone else wonder about that Euron Greyjoy (Pilou Asbæk) and Grey Worm (Jacob Anderson) confrontation? About a certain conversation between Sansa (Sophie Turner) and Arya (Maisie Williams) ?).

Taking reign increasingly more over George R.R. Martin’s vision, David Benioff and D.B. Weiss author the majority of the season’s scripts, the season featuring more witty dialogue and banter than in seasons past, particularly in scenes involving an unlikely union of characters. However, the writing at times panders to the audience, most notably in Ser Davos Seaworth’s (Liam Cunningham) first exchange with a long-awaited returning character, Tyrion’s (Peter Dinklage) jealousy of Jon’s brooding, and the Hound’s (Rory McCann) brief words to the Mountain (Hafþór Júlíus Björnsson).

These criticisms aside, Season 7 is technically superior to previous seasons of Game of Thrones, particularly in the episode ‘The Spoils of War’. For a battle scene within the episode, twenty stuntmen are set on fire simultaneously, breaking the record held by Saving Private Ryan (thirteen stuntmen simultaneously on fire). This scene is also absolutely horrifying to watch as it depicts a brutal defeat in battle and, as in ‘Battle of the Bastards’, primarily follows the desperation for survival of a single character as his fellow men are turned to ashes and blown away by the wind. Additionally, Season 7 features more and lengthier scenes with Daenerys’s dragons- particularly in battle- than in previous seasons. Both CGI advances and increases in budget have made these scenes feasible and might serve for HBO as an experiment of scale before Westworld takes up the mantle as the network’s leading show.

Game of Thrones also holds a particular advantage this season in that confrontations between lovable characters on opposite sides of the battlefield occur. But for all its potential to be heart-wrenching, Season 7 lacks any truly heart-stopping moments like the events of The Red Wedding or Hodor’s origin. Benioff & Weiss are not nearly as sadistic as J.K. Rowling when concluding their story and they reveal their cards too soon as Jaime Lannister’s (Nikolaj Coster-Waldau) allegiance shifts. In the upcoming Season 8, the battle between good and evil is now entirely delineated permitting an amenable resolution to a potential confrontation between Daeneyrs and Jon.

If a viewer, for whatever hypothetical reason, was limited to only seeing a single episode of Season 7, the final episode ‘The Dragon and the Wolf’ would be one’s best choice. At a runtime of eighty-one minutes- the series longest episode yet- ‘The Dragon and the Wolf’ channels previous seasons of Game of Thrones in that its pace allows for important scenes between characters to naturally develop and not feel rushed or fragmented. We see similar hints of quality in the subtlety within ‘The Queen’s Justice’ as well. Our best hope is that Season 8, where each episode could potentially have a lengthier runtime, can follow suit in order to restore the dramatic height of Game of Thrones after a middle-of-the-road season.