The Ghost Monument acts as a statement of intent for this new era of Doctor Who straight from the start. I’m pretty sure I wasn’t the only one who got goosebumps from that new title sequence by Ben Pickles (a fan who’s been doing brilliant VFX work for years online under the pseudonym ‘John Smith’). It was simultaneously eerie and familiar with vibrating, pulsing timey – wimey stuff pulsating across the screen like a kaleidoscope of time travel. Combining with Segun Akinola’s stripped-back and droning recreation of the theme, the sequence harkens back to the original series openings whilst giving it a crisp and satisfying polish. It screams ‘mystery’, and although I can’t say that’s the feeling I’ve been getting from the episodes themselves (so far, at least) I will say that it’s an extremely welcome change and one I’m looking forward to rewatching.

That’s not the only thing that’s crisp too: director Mark Tonderai and the visual effects team once again managed to make the show seem as cinematic as ever, something that fans hadn’t seen the likes of since 2013’s ‘The Day of the Doctor’. Thanks to filming in South Africa, the production team were able to crank up the sweeping shots and lavish landscapes, and make the most of the minimal set design to the best of their abilities. This is the best the show’s looked production-wise in quite a while. In particular, the one shot following The Doctor and Yaz (Yasmin Khan) waking up on Epzo’s (Shaun Dooley) crashing spaceship after the cliffhanger from last week was marvelous. It didn’t show off and didn’t distract from the plot at all, but added the intensity needed for a ship struggling to find and land on Desolation, a planet slightly out of orbit. After some brief jiggery pokery (and remember The Doctor came first in jiggery pokery), we’re back on the ground and ready for a fairly standard plot.

“This ship is old school. I’m good at old school” – The Doctor.

Whilst Yaz and The Doctor arrive alongside Epzo, Graham (Bradley Walsh) and Ryan (Tosin Cole) show up with Angstrom (Susan Lynch), another humanoid pilot in a competition with Epzo to reach a fabled ‘Ghost Monument’ and win a lifetime’s supply of riches from Art Malik’s Ilin, a luxuriously pretentious wealthy man hidden from the dangers of Desolation via a holographic interlink. As you’ve probably already guessed, the episode then acts as a straightforward A to B plot as The Doctor and her three new best friends tag alongside the final stages of the last ever Rally of the Twelve Galaxies, facing off against AI robot guards (complete with stormtrooper aim), killer nanites in the planet’s water and a mysterious sentient cloth species that…never quite fully becomes a threat if we’re being honest. Chibnall’s writing continues to be the weakest element within this new incarnation of the show, with very little creativity and surprises within the plot. Almost every story beat can be predicted within a few minutes, and the ones that can’t feel forced and sometimes shoehorned in. That being said, we get some nice moments along the way and the episode itself never feels like a clear step-down in quality from the series opener.

For example, many of the nicer moments come in the form of character interactions. The relationship between Graham (Bradley Walsh) and Ryan (Tosin Cole) is put to the test after last week’s death of Ryan’s grandma/Graham’s wife Grace. Walsh’s Graham is an old soul, trying to converse with his grandson and help him to understand how to properly convey his emotions whilst understanding that it won’t sacrifice his idea of masculinity, whilst Ryan is more than happy to take an alien gun out for a short test run on the robot bodyguards instead of addressing his frustration at their situation. It’s easily the most interesting relationship within the episode, and unfortunately leaves poor Yaz with barely anything to do for the fifty minutes. Chibnall attempts to have her reveal some personal information but it’s lost in a sea of frantic emotional speeches. We’re still early in the series though, so there continues to be a spark of hope.

Jodie Whittaker’s Doctor remains a buoyant and feisty presence on screen, enthralled with every new piece of information and keen to rectify everything she doesn’t know. Although there’s flashes of intimidation here and there (particularly when it comes to guns and the use of violence, unless it’s a Venusian aikido of course), she’s still yet to be put under true pressure, and personally that’s how I found out just how much I love an incarnation of The Doctor. Guest stars Susan Lynch and Shaun Dooley offered some nice back-and-forth between competing finalists, with Dooley clearly enjoying his scumbag portrayal and Lynch taking the opportunity to add a smidgen of pathos to Epzo when talking about her homeworld. Of course this just leads up to another obvious conclusion as the two decide to join forces during the climax of the episode when the fabled ‘Ghost Monument’ is revealed to be the TARDIS warping in and out of stasis, but that doesn’t take away their presence from the rest of the episode.

As night falls on Desolation and the team are lead into the underground tunnels, their discovery of an abandoned and decrepit laboratory, complete with warning messages from the scientists about the monsters they’ve created, is devised to of course raise tension and provide the episode with a monster that the lot have to deal with. However the whole ordeal feels awfully rushed. The Doctor’s translation of a message isn’t the best way to signify danger and the hissy, echoed resonance of ‘The Remnants’ – cloth-based monsters that kill beings by dwelling in on their greatest fears- also doesn’t help proceedings. I found myself struggling to understand much of what was going on, as before this ordeal the episode had taken a fairly relaxed approach to pacing. Nevertheless though the snippets of information regarding a possible series arc with The Doctor’s memory harkening back to a “timeless child” and The Remnants themselves being a byproduct of the Stenza’s influence on the planet (the tooth-faced bounty hunters from last week) are interesting, I’m surprised that such a seemingly-vanilla villainous race could end up playing such a huge part across the series. I’m always up for being pleasantly proven wrong though. 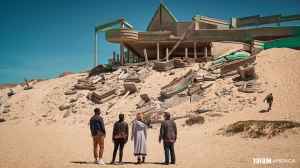 I must also admit a slight underwhelming feeling at how quickly The Doctor seems to give up when the TARDIS is shown to still be phasing in and out of the planet – something that wasn’t presented as a problem throughout the entirety of the episode. In fact, everyone I watched the episode with also were left confused as to why the crew seemed glum even though we all assumed the police box was just around the corner. It’s a glaring error in an episode that up until then had been running quite smoothly, and the TARDIS responding to The Doctor’s call soon after just made me dwell on the moment’s strangeness.

That being said, that grievance immediately left my mind soon after. As Akinola’s score brassed up and we entered the new TARDIS, I found myself feeling the same chills I felt at the reveal of the title sequence. It’s personal taste of course, but the ship’s new interior with a darkened-crystal aesthetic, off-center wall panels and overlapping round things (I love the round things) had me the moment it graced my screen. The console’s use of an egg timer, adorable mini TARDIS replica map and custard cream dispenser had me grinning from ear to ear. It seemed effortlessly tied in to the new appearance of the show. Unique, minimal, dark but with a cute edge about it that I’d love the series’ plots to take a leaf from. It definitely ended the installment on a high note. The TARDIS has been redecorated, and I really like it.