We come into this week’s episode of Kidding in a world that guarantees the show a future, thanks to Showtime’s renewal a few days ago. And if the previous two weeks are anything to go by that might be the best news I’ve had for quite a while, as Kidding seems to have finally gelled all of its components together to create a bizarre and gorgeous experimentation of grief, mental health and status.

Last week I pondered whether the cliffhanger of Will and his friends going to smoke marijuana in Jeff’s house where he’d accidentally left his gas running was simply a metaphor for his dad’s emotional state or not, and I feel as if the show was able to nail two birds with one stone (a pun that will make sense later) with another solid opening. With Michel Gondry behind the camera again, we’re treated to some deftly-handled slow-motion sequences and tracking shots as the kids realise the danger they’re in, briefly teasing the potential danger of their situation before leaving and going to a pottery class whilst intoxicated. The close-angles and bizarre choices of the characters made by this week’s writer Noah Haidle don’t stop there, but it’s a strangeness that works throughout. This is easily my favourite script of the series thus far and Noah proves himself adept at balancing the melancholy and the humour of the show’s characters with his handling of Jeff and Vivian being a particular highlight. 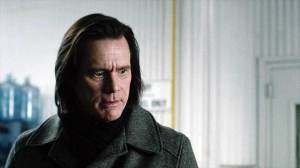 This is their episode after all. As Vivian (Ginger Gonzaga) undergoes new chemotherapy treatment after her last treatment fails, Jeff begins to reflect on a life without her. Maybe it’s because I grew up adoring the man, but something about Jim Carrey crying and destroying himself on screen really gets to me. Jeff asks Dee (Catherine Keener) to help Vivian become old through the use of her puppetry, a technique she’s apparently very familiar with. What follows is a flashback to Jeff and Dee’s childhood that allows Gondry to crack out his Eternal Sunshine of the Spotless Mind gloves to skewer sets and props in order to experiment with shape and size as the siblings watch their mother leave to ‘visit her sister in Niagara Falls’. Young Dee takes the news harshly, screaming and pleading for her mother not to leave whilst Jeff repeats the conversation back to himself through the mouth of his sister’s doll, omitting the phrases he finds upsetting and replacing them with the ideas that later form the basis of Mr. Pickles’ Puppet Time. It’s a lovely glimpse into the past of these characters and whilst it doesn’t make up for the lack of plot in regard to Dee throughout the show, it’s created a bond between the siblings that I think has been missing up until now.

After finding out Olympic ice skater Tara Lipinski is going to be portray Mr. Pickles in the upcoming ‘on ice’ tour, Jeff swears that he’ll find a way to sabotage the show. His methods lead to possibly the biggest laugh of the series so far however as he’s introduced to Tara’s sister Sara and their pet parrot ‘Tarakeet’, a phrase-repeating bird who’s prone to seizures. The opposite of the sibling relationship between Dee and Jeff, Tara and Sara seem to have an unspoken hatred of one another, challenging each other’s statuses as role models from everything down to their professions and their use of language. It’s an uncomfortable war Jeff finds himself stuck in the middle of when watching over the progress of the live show. But it’s upon exiting when he hears the bird’s repeated expulsions of Sara’s hatred of her sister using horrendous language that Jeff becomes enamored with the bird itself, attempting to teach it to only say nice words. But this is a new Jeff remember, one that’s willing to waltz over to the darker reaches of his psyche in order to achieve what he once repressed. He’s not afraid to betray his one-man-brand of wholesomeness, even down to purposefully giving a parrot a seizure and then covering up the ordeal and bringing the corpse home. This is how Kidding deftly balances tone. The depravity of Jeff’s murder is offset by his compassion and love for Vivian and those around him, and as we as an audience begin to doubt the man’s intentions we become more and more fascinated by the twisted idea of his character. It’s a sentiment that’s present in an omnipresent voiceover of biblical proportions from one of the live show’s writers Rabbi Michael Epstein (Joel Swetow).

“Good and Evil cannot and will not devour one another” – Rabbi Epstein.

It’s a fascinating dichotomy the show’s now proposing, whether or not a person can become a perfect 50/50 blend of both good and evil attributes. Whereas Jeff used to remain a monk, his darker edge is becoming more and more apparent. He even decimates the parrot’s corpse in his garbage disposal simply because he doesn’t want to take the body outside in the rain. This is an entirely new Jeff Piccirillo and one that makes the future of the show all the more exciting.

This isn’t to say that his brighter demeanor has disappeared either, far from it. The reveal of ‘Viva Loss Pages’ – Dee’s Vivian puppet who takes the form of an old librarian in Puppet Time is a moment of pure wonder. For the entire series I’ve wanted a full on recreation of an episode of Mr. Pickles’ show, and here I was teased tantalizingly as Jeff and his cast of diverse, colourful and wonderfully-imaginative co-stars launched into song for Vivian, telling her to plan for her future ahead of her diagnosis and not to write off her legacy. Jim Henson himself would be proud of such a performance, one that feels so beautifully authentic and joyous that you forget about any feathered-corpses or weed-smoking children in sight. It’s a highlight of the show so far and probably one of my favourite scenes in television all year. I really do hope there’s more of this, and that the cast and crew now have a firm handle on the show for the foreseeable future. Even Frank Langella’s Seb, in a short appearance this week, made a valuable emotional impression as he silently holds his estranged wife’s dress on their bed, with Dee’s handiwork still carved out from it.

When Gondry cast Carrey in Eternal Sunshine, he reportedly stated that Carrey was “a beautifully broken individual” and perfect for the story he wanted to tell. I’m beginning to get the feeling we’re in similar territory here, with just a few growing pains in order to hurt Kidding’s characters enough to fully take advantage of their shattered perceptions within the show.

More of this, please.