The final season of House of Cards started out behind the eight ball. The ousting of lead man Kevin Spacey after allegations of decades of sexual assault and misconduct left the show writers scrambling to determine how to proceed without the character that had been at the center of the first five seasons. There’s little doubt that Spacey’s departure from the show and the good graces of the entertainment industry was long overdue, his affinity for underage boys being a poorly kept secret even before the #MeToo driven controversy that lead to his expulsion from House of Cards, but one has to wonder if Netflix would’ve been better off killing the entire show along with Spacey’s Francis Underwood. One of the first critically acclaimed Netflix series, House of Cards does feel like something of a founding father of the streaming television era. That fact makes it even more upsetting that the show died such a gruesome and unbecoming death.

Season six of House of Cards stars Robin Wright as Claire Underwood, who became President of the United States in the middle of the sloppy fifth season of the show (yes, House of Cards was knocking on death’s door even before Spacey’s firing). Claire spent the run of the series as a confidante and at times a competitor to Francis, and Wright showed great versatility in the role throughout. However, carrying the show on her own, she has no equal presence to counterbalance her. That said, perhaps a quality season of television could’ve been crafted around Claire Underwood as the protagonist, but the lazy, soap opera-esque writing made the show unsalvageable.

The antagonists of the season are the Bill and Annette Shepherd, played by Greg Kinnear and Diane Lane respectively. I use the antagonist moniker lightly as there is truly nobody in the show worth rooting for, a quality which House of Cards has carried since early in its run. The Shepherds are an extraordinarily wealthy family dealing with the consequences of mass contamination at their industrial sites and the fallout to the surrounding communities. They lobby Claire from a position of extraordinary power and political influence, and also have a rich backstory as Claire grew up around the family. This might’ve been a worthwhile new subplot if not for the puzzling question: where have these people been for the last five years? Their absence through the show’s run makes their sudden overwhelming influence over Congress, a prior relationship with Claire, and access to the White House utterly nonsensical.

It is not just the curious backstory of the Shepherds that makes them feel so obviously shoehorned in. The family is at the center of a plethora of attempts to unseat Claire from the Presidency. This is the spark of the conspiratorial nature of the sixth season of the show. Where Frank’s surprising murder of Zoey Barnes (Kate Mara) in House of Cards’ second season was one of the show’s most shocking moments, the idea of powerful individuals showing willingness to commit horrific crimes is entirely normalized in the final season. Bill orchestrates a faux assassination attempt early in the season and it is played as a typical political move. Later, the Shepherds openly discuss the actual possibility of assassinating the President in a conference room meeting with the Vice President, who is also sleeping with Annette Shepherd. I hope that this does not seem like an unfair summary of events, but there is truly no way to sum up the twists and turns of this season of television without making it sound like bad House of Cards fan fiction. 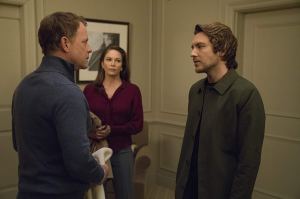 A third member of the Shepherds, Duncan, is played by Cody Fern. Duncan follows an equally absurd path of character development as he goes from manipulating members of Congress to going through an identity crisis over the revelation that he was adopted. Why this adoption subplot merited anybody’s time, we will never know. I bring up Fern’s performance specifically because he made another television splash this year on American Horror Story where he plays Michael Langdon who is revealed to be the anti-Christ. As Langdon, a part of his journey involves leading the Illuminati in an effort to wipe out humanity. Watching House of Cards, one has to wonder if a Satan-worshipping Illuminati plot-line might’ve felt more plausible in a show aiming for political intrigue.

Ultimately, the show wants its main conflict to come down to Claire and Doug Stamper (Michael Kelly), Francis’ former right hand man. A manufactured controversy forms over Francis’ last will and testament, as it becomes understood that he left all of his possessions to Doug in a copy of the document that Claire destroyed. Why Francis carried this sudden animosity toward his wife is not revealed, as even with their issues in previous seasons there always seemed to be some degree of companionship. The whole conflict seems to be expressing a desire to posthumously pit Francis against Claire at the show’s climax. This attempt is insincere and fails at every turn. Doug’s pathetic loyalty to his deceased former boss generates more eye rolls than sympathy and the way that the conflict between them builds is confusing and forced. Their “final showdown”, if you can even call it anything that dramatic, is the last knife in the heart of fans who once viewed House of Cards as a political drama.

Like most shows that cling to life for far too long, House of Cards died an ugly death, tarnishing all of the great things that it had done previously. It’d be easy to blame its demise on the removal of Kevin Spacey from the cast, and that undoubtedly plays a role, but the far greater failing is the decline of the writing into soap opera trash. This is not the first time that the show has faltered, but it was by far the greatest stumble as the writers showed a complete inability to adapt to a changing situation. The political commentary of House of Cards becomes so muddled that it fails to have any meaning at all. Obvious and ineffective statements are further diminished by an inability to commit to any sort of cohesive message. House of Cards was once one of the proud giants of streaming-exclusive content, but in its final season the house topples clumsily and is sure to go down as one of Netflix’s greatest embarrassments.