And so Kidding ends its first season with an episode that personifies everything great the show has managed to morph into through the latter half of its episodes. I’ve been anticipating Jeff’s huge, violent breakdown for weeks now and it turns out I had the show’s intentions all wrong. Instead what we were shown is a restrained, truthful and altogether more poignant affair that serves as a reminder of how much further the show may be able to go in subsequent years. That’s not to say there wasn’t violence of course…but we’ll get to that in due course.

The last cold opening of the year is a short television PSA by Jeff and Oops the puppet regarding drug use in a relatively shallow pastiche of the infamous Pee-Wee Herman crack PSA from years ago. The sequence justifies another charmingly inventive paper-made title sequence as Oops’ arms extend to reveal the show’s title. Immediately after however we’re thrown into the dreaded live Christmas tree lighting that Jeff is making a speech at to tens of millions of viewers across the country. It’s astounding that he’s made it here without Seb or any of the executives stopping him, but the tension is clearly palpable. As Tara Lipinski (still alive in hospital), a relapsed Shaina, terminally-ill Tanner, and Denny watch alongside the myriad of young children as Jeff tells a frank and truthful reality to those watching:

“Your parents don’t deserve you. You are the product of narcissism” – Jeff ‘Pickles’ Piccirillo.

Whilst publicly telling the children of America that he’s part of the distractions their parents use to get rid of them for as long as possible, Jeff admits that he feels as if he killed his own son Phillip by not listening to him properly. A teary-eyed Jill watches on front her home as her ex then tells all the kids to go and open up their Mr. Pickles’ doll Christmas presents early and to pull the string, leading us to finally find out what Jeff wanted his doll to say – “I’m listening”. A truly depressing motion of course, but one that’s true to the character. A watchful Maddie (Juliet Morris) searches her house for her presents but fails to find anything except Dee admitting she’s been pocketing all the money she’s raised for charity in a secret bank account. Jeff publicly vows that he’ll always listen even when their parents won’t (and also touches on politics/the media/global warming though it doesn’t land as hard) before walking off.

Seb meanwhile in the crowd phones up the Croatian voice actor in mind for the animated Pickles continuation and auditions him for the role, prediction Jeff’s firing. We even get another glimpse at his compassion as he asks the actor to say “I love you daddy” to him. Even though Seb is often portrayed as an antagonist, I’ve never thought he was a bad person and the small snippets of sadness he shows throughout the series have been heartbreaking. Then in classic Kidding tradition this emotional impact is suddenly undercut by Pickles-san taking to the stage and naively belting out “Allahu Akbar” before lighting up the tree – to the panic and screams of the fearing audience. It’s a nice payoff for such a small joke. One of the things the show does very well.

The remainder of the episode deals with the fallout from Jeff’s speech. Puppet Time is put on ‘indefinite hiatus’ as all the sets and props are packed away, and Jeff tells Derrell he’s never understood how Mr. Pickles gets back up the mountain after travelling down Pickle-barrel Falls. 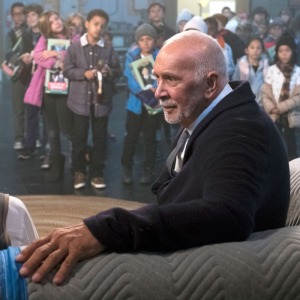 Even as his empire crumbles, Jeff’s mind is still away at other things and Derrell is honest with him, letting him know that he thinks what Jeff said in his speech was wrong. Jeff goes to Dee in her workshop for guidance, but instead finds none. Catherine Keener’s emotional problems have slowly been revealed through the course of the show and even though they’re still not being utilised fully, it’s nice to see her actually presenting some character (no matter how bad it may be). Dee then tells Jeff how the puppets she creates are all based on people she knows, albeit with exaggerated personality traits. What follows is the most charming visuals of the episode, as we see a recap of scenes from other episodes with the characters replaced by their felt counterparts. Dee tries to break up with Secret Chef, Peanut Butter and Jelly Twins perform Will and Phil’s disappearing magic tricks, Jeff shares a bed with Viva Las Pages and Seb becomes the giant towering sasquatch. It just reminds me how desperately I’ve wanted to see more of the puppets themselves and by extension more of the actual Puppet Time show as it allowed Jeff to convey his feelings strongly to a wider audience in new and inventive ways. Throughout the show too I’ve always been critical of its limited use of Judy Greer’s Jill, but seeing her take the form of Jeff’s heart puppet made me audibly gasp. She is the personification of his heart so of course we’re only going to see her sparingly, in his eyes she is idolised and something he has difficulty facing life without. More puppets in the next season please, Dave Holstein.

Whilst the Jeff Pickles/Mr. Rogers parallels have been constant throughout the show, when an army of young children show up to the closing studio set clutching their Pickles dolls and wanting to have a conversation with Jeff, it reminded me of how wholesome and similar the two are. Jeff sits down with each and every one, giving them the time they deserve and the support they need one by one as the line stretches down the road. Hell even Seb joins the queue, smiling at the support Jeff still has from his audience as he sits down and instead offers the support he never gave his son before.

It’s a truly heartwarming sequence up there with the reveal of Viva Las Pages in ‘The Cookie’ as the show’s most smile-inducing. Of course, with all the legal and financial ramifications of Jeff’s live speech, the context meant nothing to the children. They got the message they needed, the message of a grown up who they can trust, who will listen to what they have to say and genuinely help whenever he can. It’s where Jeff and Mr. Pickles combine and it gave me such hope for Jeff’s wellbeing. But then of course I remembered the show’s continuing. The same way I feel whenever there’s a glimmer of hope for Bojack Horseman. That deep reprehensible notion that something’s going to ruin everything good.

The network finally plays the Puppet Time episode about Phil’s death whilst showing everything they have leading up to the hiatus, and Jill phones Jeff and the two talk. Jill offers him company whenever he wants – a dangerous notion, and one I’m not sure is exactly encouraging him to move on or helpful to his mental state. The two were getting on so well when Jeff dated Vivian, it allowed the barrier between them to become a cushion to lean back on and banished any notion of discomfort. As they talk Jeff imagines a late night walk with Jill in the snow, the two of them laughing together in a stripped-back version of Michel Gondry’s Eternal Sunshine of the Spotless Mind, just making each other laugh and reminding you of the happiness that once graced their relationship. Of course it’s false, but this is Jeff’s hope for the evening. 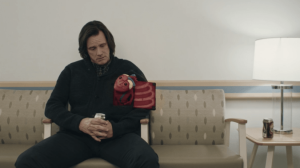 In the episode’s weakest segment, Will (Cole Allen) turns up at a drug-addled house-party thrown by his friends in Jeff’s empty second house. He apologises to Cassidy, and tells her he doesn’t exactly feel like himself. He’s now living the lives of both Phil and Will, and it’s a testament to Allen’s performance that you can see this conflict within him. One minute he’s joining the queue to talk to his dad, the next he’s hanging his Mr. Pickles doll by its drawstring. Meanwhile a sleep-deprived Peter (Justin Kirk) busts the party, and discovers Jeff’s clothing in the wardrobe (how did the kids not notice this?) and runs into Jeff on his way out. The two talk about his and Jill’s relationship, and Jeff confesses that as much as he wants to hate Peter he can’t because he’s such a nice guy. The two embrace and although on the surface this is a huge moment for Jeff, something feels wrong. There isn’t the raw intensity of his other emotional confessions in Jim Carrey’s truly committed performance. Peter offers Jeff a toke on a joint, to which he of course declines as he gets in his car ready to go home. But something inside of him snaps. Green means go. He drives forward, smashing into Peter and leaving his windscreen smashed and Peter motionless on the floor. I thought last week’s incidental lacerating of Tara Lipinski may have been the furthest we’d see Jeff go, but it appears I was deathly wrong. All we’re left with is a sarcastic and sinister “oopsie” from Jeff, as we see him replaced with Oops the puppet in the driver’s seat, panicking and flailing his limbs around. Dee’s always known which puppet Jeff was, and now we do too.

Kidding has quickly displayed a previously-unknown intelligence that it appears I had neglected to see for the first handful of episodes. It’ll be interested to see over the next week in rewatching the season what I’ll be able to pick up on, the smaller details within Jeff’s psyche and the recurring themes scattered throughout the episodes themselves. For now though, the season finale offered up a bright (or in this case, dark) future for the show. Everyone appears to be on their A-game at the moment, and I can’t wait to see what they have for us next.