There are few source materials that have so steadily churned out adaptations across stage, screen and radio as H.G. Wells’ sci-fi grandiose 1897 epic The War of the Worlds. It’s not hard to see why. It’s a timeless tale that will always resonate with audiences. But when the BBC announced their go at the narrative, the silence that followed seemed deathly and it turns out that silence may have been indicative of the production itself.

Opting for an Edwardian England as opposed to Victorian as the novel dictates, The War of the Worlds feels so inherently misplaced among the television productions of today and can’t help but feel as a misstep for the usually-trustworthy beeb. It’s not like there’s a lack of  talent behind it either. Writer Peter Harness has had great success with adaptations in the past, being responsible for the broadcaster’s own Jonathan Strange & Mr. Norrell based on Susanna Clarke’s brilliant novel, yet here he’s sidelined by restricted space (three hours) and a checklist that feels like a hangover from the network’s other period dramas. 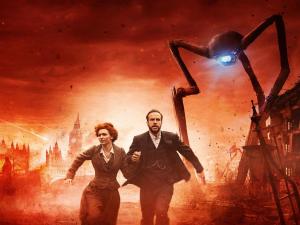 Eleanor Thompson and Rafe Spall are two loved-up heathens (Amy and George) scorned by their families; George has left his lifeless marriage for Amy’s intelligent charms against the behest of societal decency, and thus the two live in semi-defiance of the British commonplace. However after warnings from Professor Ogilvy (Robert Carlyle) about mysterious explosions on the surface of Mars, it soon becomes clear that their troubles are miniscule compared to the impending doom that the world is about to face. But is it? Wells’ initial stages of the alien invasion are well-reenacted and directed by Craig Viveiros, but the fantastical elements of the story are ushered to the sidelines throughout the series in order to make way for melodramatic relationship drama. It’s understandable within the series opener, that embeds Edwardian Woking/London with the high-production values that continue to shrink the difference between silver and small screens, but once the tripod-driving martians do arrive their presence is so few and far between that the production often feels like a monster-of-the-week Doctor Who serial.

It’s a shame too, because the visual effects work on display for the martians is incredible, rivalling even Steven Spielberg’s 2005 adaptation in some cases. The initial reveal of the first tripod as it looms over Woking’s town hall is breathtaking and offers a fleeting glimpse at what a story from this time period could do with the source material. The tripods themselves inject a fusion of steampunk into their design alongside metallic mirrored balls that fry everyone they come into contact with. It’s just a shame that the majority of the reactions to these events are so lackluster. Spall’s George is a wallowing thud of an antagonist throughout the ordeal, leisurely jogging through scenes of destruction and struggling to convey any real sense of danger. Thompson’s Amy fares better, and she’s charged with the series’ follow-up epilogue that runs through the production, lending it an oddly-formed nonlinear quality as it follows up on the lasting effects in the aftermath of the invasion as a small group of Londoners struggle in a red diseased planet they used to call home. The back and forth makes for a confusing counterpart to the initial invasion and reduces any potential tension to mere formalities, a smoke-attack in the second episode as crowds run screaming across central London comes across as tedious within the confines of the story being told. 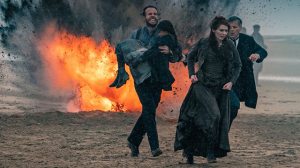 Strangely, it’s within the last third of the episodes where some glimmers of individuality are shown. As the small band of survivors as locked within a hostel with a martian free from its tripod. The promise of a tense and terrifying ordeal close to that of the source material’s basement scene would have ended the series on a high note, and yet aside from a couple of nice shots and martian designs there’s nothing to differentiate it from any of the other extraterrestrial television programmes released in recent memory. Rupert Graves and Robert Carlyle do what they can to inject their performances with enough gusto to lend the series some grit, but their acting  only serves as a reminder over how good this show could have been.

Harness obviously has some modern ideas for the series, and in a world with an unlimited budget and no time restraints it would have been nice to see this vision of Englishmen coming to grips with the fact that they’re no longer the Earth’s best colonisers done to the best of its abilities. Instead The War of the Worlds  feels like an amalgamation of haphazard tones and scenes from a longer series, squished together in order to fit within a three-hour runtime. There are bombastic and impressive beach attacks from the tripods and enough slow-burning melodrama to fill ten Downton Abbey’s, yet the balance is never right and instead makes the show seem dull.

The dystopian-style future is awash with archetypal imagery and ideas as the public suffer under a red sky that blocks out the sun. Amy and George Junior (Woody Norman) try to frame the events of Wells’ novel as a story tale-esque sequence of events; a bedtime story with no payoff or dramatic suspense. The promise of a simple retelling within a different time period would have been enough for most audiences, and I doubt many viewers would be feeling as hollow as they do from the BBC’s efforts if they had chosen such an easy route. It’s admirable for Harness and company to try something new with a story that’s embedded into the minds of millions, but when the impactful and good-hearted intentions are diluted with such strange narrative choices and bland characters it’s difficult to make much of an impact.