It’s interesting to note that Watchmen comic book writer Alan Moore refuses to be credited or associated with HBO and Damon Lidelof’s Watchmen, especially when it’s the most thematically consistent of perhaps all adaptations of his work. This sequel or ‘remix’ to the ambitious and culturally impactful limited comic series by Moore and Dave Gibbons is the perfect antithesis for our superhero-saturated times. Not only does Watchmen hold active contempt for those who choose to don a mask and call themselves vigilantes, but it does so whilst spinning a contemplative and philosophical tale of fate and humanity in 2019 which dares to go where many other shows aren’t.

Taking place 34 years after the comic, Regina King plays Angela Abar (alter-ego Sister Night) a Tulsa police officer/vigilante who becomes caught up in a war against The Seventh Kavalry – a white supremacist group inspired by Watchmen-member Rorschach’s writings to wage war against minorities and the police. After a calculated attack against the police force on Christmas Eve two years ago, officers are now required not to disclose their profession in public and can choose to obscure their appearance with the use of masks if they so wish in order to protect themselves and their families. Angela and Chief Judd Crawford (Don Johnson) are the only survivors of the attack in Tulsa, and form an unlikely friendship as the force is rebuilt with the aid of officers choosing to harken back to the minutemen/watchmen vigilante alter-ego style of presentation. However when The Seventh Kavalry begins to up the ante on their attacks and Angela discovers a long-lost relative with apparently-sinister intentions, she begins to unravel a plot that puts the future of humanity itself into danger.

Issues of race are infused into Watchmen’s DNA. The premiere’s opening depicts the Black Wall Street Massacre of Tulsa in 1921 as a family attempts to flee to safety. Burning bodies and screams make a memorable impression as chaos ensues to the haunting memory of Oklahoma! Damon Lindelof is clear with his intentions of the series from scene one – the times haven’t changed enough. Whilst Sister Night and Looking Glass (Tim Blake Nelson’s Wade Tillman) walk around in reflective masks and nun hoods, they do so without the benefit of superpowers; the identities are now a necessity for survival. And as the bodies rack up, the danger finds its way insidiously into Angela’s home life with her husband Cal (Yahya Abdul-Manteen II) as they care for their adopted children. Racism runs deep and festers in silence, and the breadth of The Seventh Kavalry’s influence reaches far beyond the police force’s grasp.

Elsewhere Jeremy Irons’ Adrian Veidt, a wealthy aristocratic lord living in a perplexingly-isolated luxurious mansion, exists within a lifetime of solitude. That is, if it wasn’t for the cloned workforce he keeps growing and executing in fantastical scenarios for his own amusement. Oh, and every now and then a swarm of tiny squids rain from the sky without reason. If you’re familiar with Lindelof’s previous work on Lost and The Leftovers, then you know this amount of questions can sometimes go unanswered. Whilst at times throughout its first handful of episodes Watchmen’s deliberate pacing and refusal to explain character intentions and histories can seem minorly frustrating, it all serves a greater purpose and one that enriches a rewatch greatly. Across the nine episodes we’re treated to an alternate world much like the one we live in, only with the anarchic components that make Alan Moore and Dave Gibbons’ world look back on a time of superheroes as nostalgic within Ryan Murphy-esque TV dramatisations. Nods and references to the source material are frequent, though the show itself stands on its own once you give into the premise. 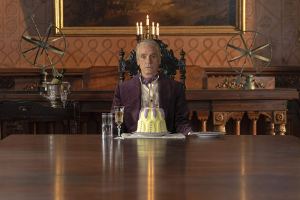 Then again if it’s not the perpetual mystery that sucks you in further, it’s the production itself. Trent Reznor and Atticus Ross’ pumping synthonic nightmarescape of a soundtrack transports the paranoia and tension to levels unheard of before and combine with refreshingly experimental direction across the series (particularly from Nicole Kassell and Stephen Williams) to craft some of the best looking television I’ve ever seen. Episodes like ‘This Extraordinary Being’ with its black-and-white nostalgia-dive through a character’s memory as it’s forced to the surface are bold and brazen hours of entertainment. Stealing glimpses of real-life characters and twisting them into Watchmen’s narrative further cements the ideology of the series itself and offer a greater sense of realism that only adds to the timely themes of the series.

As a tentative continuation of the comic, longtime fans are rewarded with slightly-altered characters and events from the source material too. Jean Smart’s take on Laurie Blake as a hardened, world-weary FBI agent disillusioned with the life of a vigilante is a far cry from her days as the second Silk Spectre/Comedienne and fits in snugly amongst an ensemble cast of dizzying talent. Regina King shines as Angela Abar, offering the sturdiest of backbones for a show that plays with expectations. It’s the kind of performance that often goes unnoticed, though thanks to the experimentations with forms and its non-linear storytelling King is given more than enough opportunities to chew scenery and offer raw emotion in equal measure. Yahya Abdul-Manteen II continues to offer a supporting role that lingers long after the credits roll inside a character that many other actors would struggle to pull off. Jeremy Irons as Veidt too feels like the epitome of dream casting for the character, even if his antics are kept away as a side-piece alongside the show’s main narrative. His cutaways amongst his castle grounds feel like a vacation, and Irons is typically razor sharp with dry wit and a biting attitude that seems like this performance is the most fun he’s had in years. 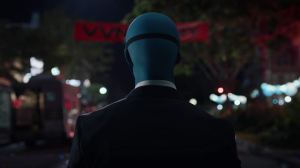 Of course some of the choices to reflect on the source material with a realist sense of right and wrong will always split fans. The objectivism as Moore states it was written with can dampen your experience depending on your personal preference for pre-existing characters. It’s a far cry from what Zack Snyder did with the property in 2009, choosing instead to carve its own future out of the mythology associated with the series. The use of Dr. Manhattan is the show’s largest connection with the graphic novel, and as the series progresses his presence as not only a godly relic but a key player increases. ‘A God Walks into Abar’ has a screenplay by Lindelof and Jeff Jensen that shivers with intelligence and works as a standalone love story and answer-fuelled roundup before the season finale. Speaking of which, the show’s superhero nature is featured in full force as the series ends with a bombastic standoff with enough thematic depth to justify the destruction on-screen.

It’s hard to explain just how much of Watchmen feels like jigsaw pieces slowly fitting into their right places. It’s taken an allegorical tale that tackled subjects prevalent throughout the 1980s and had updated it for today’s societal landscape under the guise of a subgenre most audiences flock too. Whether or not a second season is coming, the show feels like a complete package that many other contemporary mainstream drama productions could only dream of. Watchmen is impeccably written, directed and performed by a talented cast and crew at the top of their game with a passion for one of the best stories ever put within the pages of a graphic novel – I don’t think we ever could have hoped for better.