It’s been a whole year since the last time we were treated with a mad-cap Doctor Who adventure from Jodie Whittaker and the gang. Whilst 2019 featured a distinct lack of time-travelling police boxes, it was a sign of hope for Chris Chibnall’s sophomore season as showrunner to adapt and overcome some of the show’s storytelling shortcomings that plagued the thirteenth Doctor’s first outing. From the looks of season opener ‘Spyfall: Part One’ however, it appears that we might be in store for much of the same. Albeit with a greater sense of urgency.

Choosing to bypass the traditional holiday special altogether this year makes sense promotionally after such a long time away from television, and the episode begins with a globe-trotting trio of vignettes similar to last year’s ‘Resolution’. In Western Africa a secret sniper operative disappears from their post, over the Pacific Ocean an undercover passenger is attacked in an aeroplane bathroom, and in Moscow a safehouse doesn’t appear to be all too safe for an agent in need of extraction. All three succumb to invisible and wall-shifting monsters that phase in and out of solid matter – it’s a national threat to the secret service, which naturally MI6 uses as an excuse to call The Doctor for help. 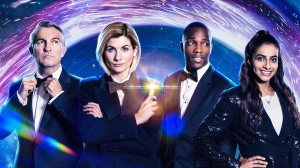 ‘Spyfall’s existence as a pastiche of James Bond and the spy sub-genre seems like an odd choice for Doctor Who. The show has dabbled in such festivities before for comedic effect but here Chibnall’s script leans heavily on the tropes the audience is familiar with. After being reintroduced to The Doctor’s ‘fam’ of Ryan (Tosin Cole – his dyspraxia flaring up again during a basketball match), Yaz (Mandip Gill – hey, remember when she was a cop? Well turns out she still is!) and Graham (Bradley Walsh – still as dependable as ever), we’re ushered into a brief action sequence showcasing black sedans and an evil satnav.

This brings up a recurring problem from the last series in terms of pacing, as even within the first part of a two-parter there’s an overwhelming need to rush through proceedings. Within the first twenty minutes we’re witnessing the assassination of the head of MI6 (a short-lived Stephen Fry) and force-fed exposition regarding billionaire tech-genius Daniel Barton (Lenny Henry). If you remove the (limited) presence of the transmorphing alien beings then the plot essentially breaks down to a billionaire responsible for a new popular web browser working alongside an evil force to take down secret agents across the world in preparation for an alien invasion. So little of it feels like science fiction at times that it begins to harken back to Steven Moffat’s experimental season seven of the show with its ‘blockbuster-of-the-week’ mentality. ‘Spyfall’ also manages to cram in a gunshot-fuelled car chase, a casino-royale-esque playboy party and a plane chase sequence too in case you were wondering. 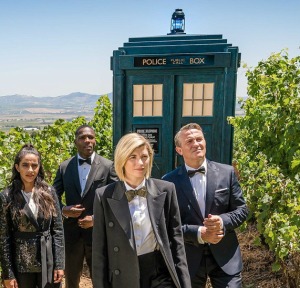 That’s not to say at many points the audience is aware of what’s going on. As par with the genre they’re having fun with, characters are double-crossing and dumping information whenever they get the chance but never to the point of answering any of the narrative’s primary questions. At one point The Doctor and Graham travel to meet an old acquaintance in the form of ‘O’ (played by the delightfully talented Sacha Dhawan) in order to get more information and yet aside from a cool (if underutilised) force-field sequence we’re left just as in the dark as before. Meanwhile Ryan and Yaz infiltrate Barton’s company in order to get information on the man himself and learn he’s only 97% human. It’s an intriguing premise for sure but it’s the sole finding of a huge chunk of the episode’s runtime. Of course, with this being the first of a two-parter there’s always room for leniency in criticism, but the heavy-handedness of the dialogue at times brought pacing and characterisation to a complete standstill which often clashed with the frantic vibe the episode’s theme aspires for.

Director Jamie Magnus Stone nails the epic, sweeping shots that establish the lengths the production crew have gone to make the show look fantastic. The willingness to travel pays off dearly and the dry sun-drenched plains of Australia counteract the concrete-bleeding greyness of Yorkshire and London with a sense of giddy joy. The more compact moments in ‘O’s secret hideout are suspenseful and claustrophobic, with the alien trap bring some much-needed tension to the show’s threat. Segun Akinola’s score also fleetingly ushers in the orchestra and brass-influence of the Bond theme with a delicate touch and just enough to show off his continued talents as a composer in the shows broader, action-packed moments.

Then there’s that oh-so-unexpected reveal. During the episode’s climactic showdown with Barton on his plane as he tries to escape, Sacha Dhawan’s ‘O’ reveals himself to be none other than The Master, another Time Lord and one of The Doctor’s longest enemies. Whilst the surprise factor counts for quite a lot here, the actual reveal felt unearned to me. It’s been less than 13 episodes since the last time we saw The Master, and even then it was a question of her (she was Missy, then) continued redemption arc. It appears that Chibnall has usurped the foundation laid by Steven Moffat and wants to harken back to a more maniacal and pantomime-esque version of the character’s villainy. It’s clear that John Simm’s portrayal of the character previously has had an effect on Dhawan’s portrayal too, and it’ll be interesting to see if along with continued screen-time he’ll develop past the grimacing scene-stealer glimpsed at the end of this episode. That’s not to say he isn’t having fun of course, it’s impossible not to see the joy of his reveal and the glistening tingles of excitement in those final five minutes. 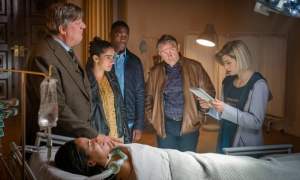 ‘Spyfall: Part One’ is a mixed bag for sure. Jodie Whittaker’s Doctor continues to feel like a side-character in her own show, and her quips waver between cringe-inducing idiocy and the gleeful brilliance of a childlike-adventurer. Maybe it’s time for the four-person TARDIS team to be cut short a member for narrative purposes, because until then it seems like any and all development is left for one-liners and joke callbacks. But still, it’s the first of a new run and there’s many answers left for part two’s plate next week. What are the actual creatures hunting people down? What’s that strange, cable-filled forest they send people to? How is The Master involved in all this? If he’s stolen ‘O’’s identity, does that mean he looks different? Why is Barton only 97% human?

As The Master cryptically states to his nemesis ‘everything you think you know is a lie’, but is this just a macguffin? It doesn’t seem like the pace is going to slow down, but at least we don’t have very long to wait for resolution.