Kidding begins to string together its different narratives in a cohesive whole for this season, and it looks as though Jeff’s going to be in for some serious ethical and legal trouble. But first, in the episode’s cold open we’re introduced to a young blind Puppet Time viewer, overjoyed from being able to see Mr. Pickles for the first time on TV after having successful eye surgery. We know by this point that Kidding never wastes a cold open and always finds a way to loop it back to the episode, and here is no exception…

“Fans are for pop stars, we call this ‘Friend Mail’’ – Jeff ‘Pickles’ Piccirillo.

After recovering from surgery, Jeff is overwhelmed by the amount of mail from his ‘friends’, boys and girls across the globe wishing him well and asking him where he is now that the show isn’t on the air. It’s simply too much to keep up with and he can’t write back to all of them – his altruism only stretches so far. It’s this notion that plants the seed of an idea which I’m guessing is going to become the big debate across the season, as Jeff develops an idea for a Mr. Pickles doll that can talk and listen to kids around the world via wifi from anywhere in the world. It’s a creepy idea however you look at it, but Jim Carrey’s wide-eyed hopefulness gets you so caught up in the positive effect it could have that you almost start to think it could work. Maybe? I mean, it’s as if the conspiracy behind virtual assistments like Alexa and Siri were true… 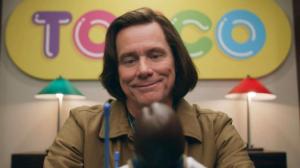 Before getting out of hospital Jeff is inspired by a wise stranger speaking through an electrolarynx in his room. All Jeff sees is their shadow, as if it’s his socially-inept personality convincing himself to go through with the obviously-terrible doll. I couldn’t help but think of The Wizard of Oz in its portrayal as a shadow against the curtain by his bed, as Jeff remains clueless that it’s actually figure skater Tara Lipinski, whose throat was slashed open due to Jeff’s meddling with her family dynamic. Tara’s obviously out for revenge, and uses the man’s false sense of good to get him into hot water. I don’t think this is the last we’re going to see of her either.

“If everybody has something nice to say about you, history questions your very existence” – Tara Lipinski.

Meanwhile Dee and Scott are busy dividing their house up for their upcoming divorce. Scott’s found out about Dee’s fake charity trips and threatens her with legal action, oh, and he wants full custody of Maddy too. The same Maddy who drags around her favourite axe because she likes the noise it makes and has her own puppet called ‘Mr. Chompers’ who pre-chews all of her meat for her. All this stress culminates in a moment of lashing out as Dee flings her craft table across the floor. Director Kimberly Peirce slows time down to show the manic plates she’s going to be spinning this season, both in her personal and professional life. Catherine Keener’s performance continues to teeter the line between tragedy and comedy nicely, and when Seb asks her to take over the Puppet Time empire we immediately know how badly this is going to go. Even the stress from her divorce drives her to start sniffing glue.

Speaking of Seb, Frank Langella reigns in his business demeanour for much of this episode, trying to disguise his disgust at Dee’s enthusiasm over Jeff’s doll idea and keeping quiet through Jeff’s delusional justifications. Kidding has a way of making Seb a simultaneous hero and villain by tainting every single one of his actions, and that’s a nice balance writer Roberto Benabib strikes in this more grounded episode. He ensures both his children are back living together, because together they might just be able to sort each other out. 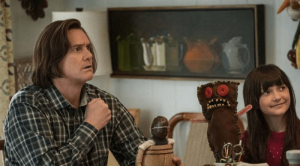 Elsewhere Will finds a leftover Christmas present – a book of black magic that apparently gives instruction on how to turn back time. Last week we Cole Allen’s Will let loose that he pines for the happier period of their family, and it seems as though the show might lean more into the fantastical in order to give him what he wants. Of course, in reality it’s just a placeholder for Will to find the secret compartment in his home which contains thank you letters from various recipients of organ donations – it turns out Jill did donate them (or did she?). Will tracks down one of the addresses in his magic book (which is strange, I thought it was a date for a library book on the inside) which leads him to, you guessed it, the (no longer) blind boy from the cold open! It’s interesting to see Will recognise his brother’s eyes in someone else and it’s a testament to the unique tonal blend of the show that it can pull off these moments amidst talk of time travel and muppet-style puppets.

“I want 8 inches of me in every child’s bed” – Jeff ‘Pickles’ Piccirillo (talking about his 8-inch doll). 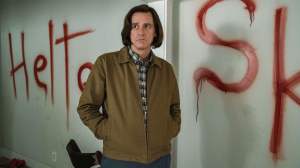 Back in reality Jill serves Jeff final divorce papers and acts as a barrier between him and Peter (she still let him have the lollipop that Jeff sent, however). There’s a strange connection between the two in their brief interactions throughout this episode, and the bond that they shared last week in ‘Up, Down and Everything In Between’ is commented on. Could Peter begin to slowly become like Jeff? Is Kidding feeling okay? The emotional resonance of the opening two episodes is replaced here with a dose of fantasy, and much like the first season it feels as though the show isn’t quite comfortable with how to present these themes and ideas yet. Obviously none of it is real, but there’s still a lingering disconnect that hasn’t quite gelled together that I’m hoping will slot into place if the show continues along this line.

That’s not to say there aren’t moments of endearing pain. Seb and Jeff confront each other during the meeting for his doll, at first through a two-way mirror (essayists take note) and then face to face. Seb states that as long as he’s still breathing he’ll be calling the shots, to which Carrey’s Jeff menacingly glares and calls back to the time he shot his dad in the face with a pellet rifle. Jeff’s thirst for blood might not be satiated with Peter, but to get rid of his own father? Surely that’s going too far…

It all culminates in a transformation for Jeff. Dee as the new showrunner for Puppet Time declares that she hates her brother’s hair and the two laugh and joke as they trim it short, blending Carrey and Jeff Pickles together visibly (as well as knocking a few years off the look). They’re going to get the show back on the air and things are going to get better for them.

I must say I never expected such a time jump, but four months later makes sense for the narrative. It allows various behind-the-scenes production pieces of Puppet Time’s return to come to fruition, and also allows Jeff to send out the first batch of his insidious dolls. Cut to a young girl named Judy who drowns out her fighting brothers as she goes to bed being sweetly sung to sleep by a wholesome Jeff in his office at home. This is the utopia the man dreams of. Elsewhere Peter opens up one from Jeff too, a way for the two of them to talk without Jill’s interference, and Seb’s lost his passion at a retirement party now that Dee has taken over. It looks like things are finally going Jeff’s way…until a parent discovers the true nature of the dolls and calls him a sicko. Well, this will probably all sort itself out.